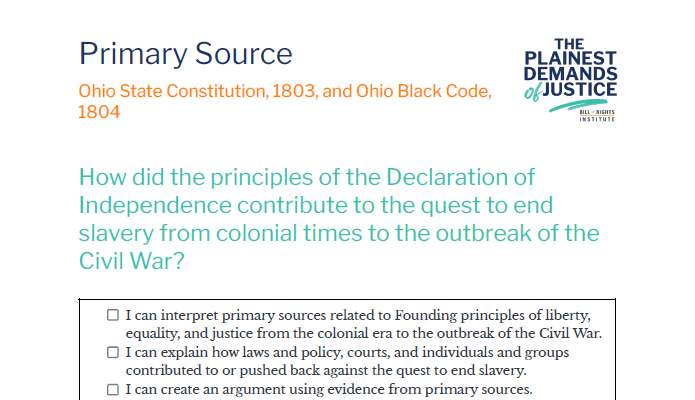 Article VIII, sec 2. There shall be neither slavery nor involuntary servitude in this State, otherwise than for the punishment of crimes, whereof the party shall have been duly convicted; nor shall any male person, arrived at the age of twenty-one years, or female person arrived at the age of eighteen years, be held to serve any person as a servant, under the pretense of indenture or otherwise, unless such person shall enter into such indenture while in a state of perfect freedom…

Section 1. Be it enacted by the General Assembly of the State of Ohio , That from and after the first day of June next. no black or mulatto person shall be permitted to settle or reside in this state, unless he or she shall first produce a fair certificate from some court within the United States, of his or her actual freedom, which certificate shall be attested by the clerk of said court, and the seal thereof annexed thereto, by said clerk. . .

Sec. 3. And be it further enacted, That no person or persons residents of this state, shall be permitted to hire, or in any way employ any black or mulatto person, unless such black or mulatto person shall have one of the certificates as aforesaid, under pain of forfeiting and paying any sum not less than ten nor more than fifty dollars, at the discretion of the court. . .