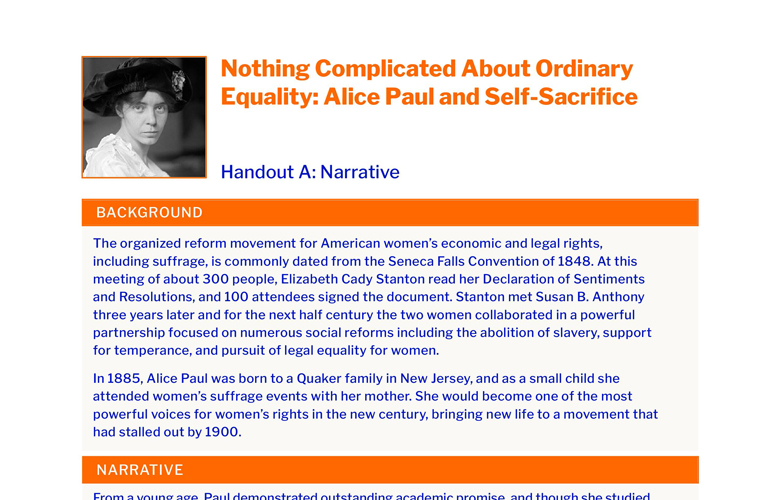 The organized reform movement for American women’s economic and legal rights, including suffrage, is commonly dated from the Seneca Falls Convention of 1848. At this meeting of about 300 people, Elizabeth Cady Stanton read her Declaration of Sentiments and Resolutions, and 100 attendees signed the document. Stanton met Susan B. Anthony three years later and for the next half century the two women collaborated in a powerful partnership focused on numerous social reforms including the abolition of slavery, support for temperance, and pursuit of legal equality for women.

In 1885, Alice Paul was born to a Quaker family in New Jersey, and as a small child she attended women’s suffrage events with her mother. She would become one of the most powerful voices for women’s rights in the new century, bringing new life to a movement that had stalled out by 1900.

From a young age, Paul demonstrated outstanding academic promise, and though she studied social work and served the poor at settlement houses, she disdained the typical professions open to women: nursing, teaching, and social work. She later explained, “I knew in a very short time I was never going to be a social worker, because I could see that social workers were not doing much good in the world…you couldn’t change the situation by social work.” After completing a bachelor’s degree in biology and then a master’s degree in sociology, Paul sailed to Great Britain in 1907. There, she began to work in the women’s rights movement, while continuing her studies in economics and sociology. She joined the Women’s Social and Political Union (WSPU) in Britain, participating in processions, demonstrations, and civil disobedience for women’s equal rights. As a result, Paul and other suffragettes were repeatedly arrested and imprisoned.

In 1910, Paul returned from Great Britain to work for legal and economic equality for American women, beginning in Philadelphia. Paul joined the National American Women Suffrage Association (NAWSA), which at the time was focused on state-by-state referendum campaigns to amend state constitutions. However, from 1890 (when the American Woman Suffrage Association and the National Woman Suffrage Association had joined to form NAWSA) until 1910, the state-by-state strategy had been successful only in a handful of western states. Alice Paul believed it was time to employ the more militant and confrontational protest tactics that suffragettes used in England, including street meetings, parades, and picket lines. All of these non-violent activities drew harsh criticism from those who believed that such behaviors amounted to unladylike and scandalous rebellion against women’s proper sphere. However, Paul saw the benefit of pushing through the  boundaries of acceptable public behavior in order to gain public attention and sympathy.

In 1913, Paul and other members of NAWSA saw a perfect opportunity in the inauguration of Woodrow Wilson as United States President. They organized a Women’s Suffrage Procession to be held on March 3, the day before Wilson’s inaugural parade. More than eight thousand people marched for women’s suffrage in spite of harassment from spectators, a crowd estimated at half a million.

Frustrated by the lack of progress on women’s rights and believing that NAWSA was too conservative, Paul formed the National Women’s Party (NWP) in 1917. This small and determined group distributed pamphlets, held peaceful protests, and lobbied Congress with their demand for a constitutional amendment barring voting discrimination based on sex. More than 20 of the 48 states had protected the right to vote for women in local and state elections by 1917, but the NWP insisted that a state-by-state approach was inadequate and unjust.

Frustrated with the president’s failure to promote women’s suffrage, Paul and other members of NWP frequently sought meetings with Wilson, which he indulged without committing to any action on behalf of women’s suffrage. Finally, he informed the suffragists that he was tired of having the same conversations over and over, and would receive no more suffrage delegations. “All right, [we thought] we will send this perpetual delegation. And you won’t have to see it; we will just hold up banners reminding you,” Paul explained in an interview years later. Miss Paul led the National Women’s Party in January 1917 to begin picketing on the sidewalk in front of the White House, demanding that President Wilson take action to support votes for women. The first ever to implement this protest method at the White House, the Silent Sentinels stood watch continuously (six days a week) for the next 18 months, holding large banners that charged Wilson with hypocrisy. Wilson’s April 2, 1917 speech asked Congress to declare war on Germany in order to “make the world safe for democracy,” but, according to one banner, “20,000,000 American women are not self-governed.” Mobs attacked the women verbally and physically, and the police stood by, leaving the women to fend for themselves.

Though the silent picketers were committed to non-violent resistance, broke no laws and never disturbed the peace, police officers began arresting the demonstrators in June. Undeterred, ladies who had been arrested returned to their posts after their release. While NAWSA had patriotically paused its suffrage activities and pledged to support the war effort, NWP suffragists persisted, as Paul pointed out that America’s involvement in war against autocracy overseas helped illustrate the irony of women being excluded from their own governance. As Silent Sentinels were arrested, new protesters stepped up to take their places until they too were arrested and sent to jail. In Washington’s District Jail and the Occoquan Workhouse, the women were beaten, kicked, choked, chained to cell bars, locked in rat-infested cells, and provided only rotten, worm-filled food. They were permitted neither visitors nor consultation with their lawyers. Over time, the jail sentences grew from a few days to several months, with longer and harsher sentences and additional tortures applied to leaders like Alice Paul and Lucy Burns.

Protesting against these unjust and unconstitutional conditions, Paul concluded that the best way to move forward was to implement hunger strikes. Always the expert strategist intent on taking extreme measures to gain access to the American conscience, Paul wrote that forced feedings and other brutality applied against the protesters provided “excellent ammunition” in the cause. “The more harsh we can make the Administration seem…the better,” she had explained in a letter to a fellow suffragist. The prisoners were examined by doctors, cajoled by prison authorities to eat voluntarily, and threatened with confinement in the ward for the insane. Finally, considering the prisoners’ declining health and increasing likelihood of martyrdom, prison authorities determined that they would no longer simply allow the prisoners to starve themselves, but would begin forced feeding.

In this ruthless process, several officers would be assigned to restrain the prisoner, binding her tightly in bedsheets and, if necessary, sitting on her. A doctor inserted a rubber hose into the prisoner’s nostril, forcing it down the back of the throat and into the esophagus and stomach. This excruciating procedure was often unsuccessful on initial attempts, and caused lacerations, gagging, and vomiting before the actual “feeding” even commenced. Finally, liquid food, often raw eggs mixed with milk, was funneled into the tube. The process was repeated two or three times a day.

News reports of the women’s self-sacrifice embarrassed Wilson and other leaders in Washington. Public outcry in response to American citizens, particularly upper-class, educated women, being jailed and brutalized for exercising their constitutional right to protest peacefully forced Wilson and others to bend toward justice. The Nineteenth Amendment was finally adopted in 1920, granting American women the right to vote. Years later, Paul stated, “I never doubted that equal rights was the right direction. Most reforms, most problems are complicated. But to me there is nothing complicated about ordinary equality.” She and other suffragists were willing to sacrifice their own comforts to fight injustice and win the vote for women.