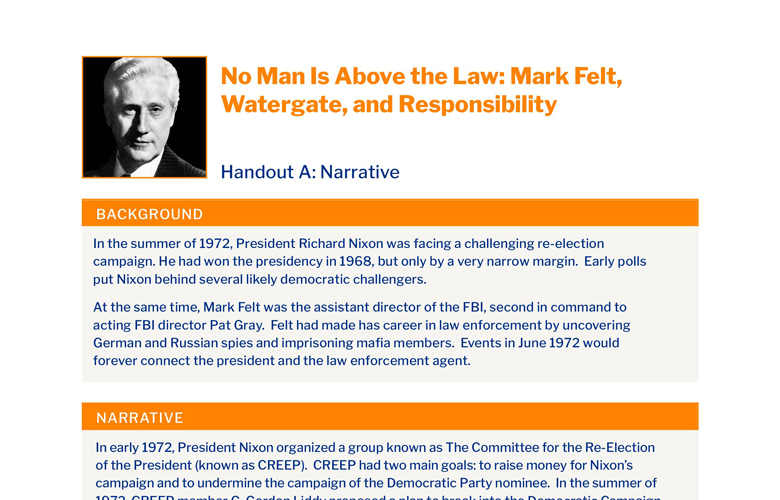 In the summer of 1972, President Richard Nixon was facing a challenging re-election campaign. He had won the presidency in 1968, but only by a very narrow margin. Early polls put Nixon behind several likely democratic challengers.

At the same time, Mark Felt was the assistant director of the FBI, second in command to acting FBI director Pat Gray. Felt had made has career in law enforcement by uncovering German and Russian spies and imprisoning mafia members. Events in June 1972 would forever connect the president and the law enforcement agent.

In early 1972, President Nixon organized a group known as The Committee for the Re-Election of the President (known as CREEP). CREEP had two main goals: to raise money for Nixon’s campaign and to undermine the campaign of the Democratic Party nominee. In the summer of 1972, CREEP member G. Gordon Liddy proposed a plan to break into the Democratic Campaign Headquarters at the Watergate office building in Washington, DC. Once inside, the burglars would steal campaign documents and install devices that would allow CREEP to eavesdrop on phone calls made from the office. Five burglars, led by James McCord, broke into the Watergate office building on the night of June 16, 1972, but the plan failed when the group was arrested by a security guard.

CREEP quickly moved to limit the damage caused by the burglary. Their main goal was to make sure that none of the men involved testified about any connection to the White House. The burglars were offered “hush money” if they would remain silent about their political ties. While people do not know if Nixon knew about the burglary before it happened, he became involved in the cover-up almost as soon as it began. Not only did Nixon approve of the payoffs, but he also put pressure on the FBI to discourage a thorough investigation.

Two reporters from the Washington Post, Bob Woodward and Carl Bernstein, began investigating the burglary, following a tip that the burglars had the phone number for Howard Hunt, a White House official. When Hunt refused to answer any questions from the reporters, they turned to Mark Felt at the FBI. Felt secretly met with Woodward and Bernstein to provide information on the investigation. For example, Felt provided confirmation that money from CREEP was being diverted to pay off the burglars.

Felt insisted, however, on absolute secrecy. His name was never mentioned in any of the stories written by Woodward and Bernstein. In a book written in 1974 about the investigation, Woodward and Bernstein referred to Felt by the alias “Deep Throat”, a name suggested by Washington Post Editor Ben Bradley, because Felt provided deep background for the reporters. Felt had good reason to be worried about disclosing information as his job and personal reputation were on the line. Nixon officials in the summer and fall of 1972 put pressure on FBI Director Pat Gray to fire anyone providing information about the investigation to the press.

Although the Watergate scandal did not affect the election of 1972−in which Nixon easily won re-election−by the spring of 1973, the cover-up began to unravel. In February, the U.S. Congress began investigating the break-in and its connection with the White House. In March 1973, James McCord, one of the burglars, declared in a letter that it was not just Liddy and Hunt involved in the burglary, but people higher up in the White House. Woodward and Bernstein continued to develop the story, relying on the secret assistance of Mark Felt to confirm that John Dean, John Ehrlichman, and H. R. Haldeman, all aides to President Nixon, were involved in the cover-up.

In August 1973, John Dean testified before Congress and claimed that Nixon’s aides were involved in the cover-up. In their testimony, Ehrlichman and Haldeman denied this and claimed Dean was lying to save himself. Congress was in a quandary, unable to decide who was telling the truth. When another Nixon aide, Alexander Butterfield, revealed that a taping system existed that recorded all conversations in the Oval Office, Congress demanded access to the tapes. Nixon refused to turn them over, citing “executive privilege,” an argument based on the separation of powers underlying the U.S. Constitution. In July 1974, the Supreme Court ordered Nixon to turn over the tapes.

The tapes confirmed the information that Woodward and Bernstein had been reporting—that Nixon had been involved from the very start in the cover-up. In late July 1974, both Republicans and Democrats on the House Judiciary Committee voted to recommend impeachment of the president to the full House.

To avoid further humiliation, Nixon announced his resignation on August 8, 1974. One month later, President Gerald Ford pardoned Nixon for the crimes he committed as part of the Watergate cover-up. Ford hoped the pardon would end the “national nightmare” of Watergate, and, by accepting the pardon, Nixon would be admitting his guilt.

The Watergate scandal could not have been exposed without the assistance of Mark Felt. Felt’s primary motivation was to protect the FBI from Nixon’s meddling—to preserve its independence and ability to enforce the laws. In a 2006 interview, the former agent said, “I was trying…to keep the Bureau on the proper course.” Felt understood the virtue of responsibility and fought for the concept that no one, not even the president, is above the law.