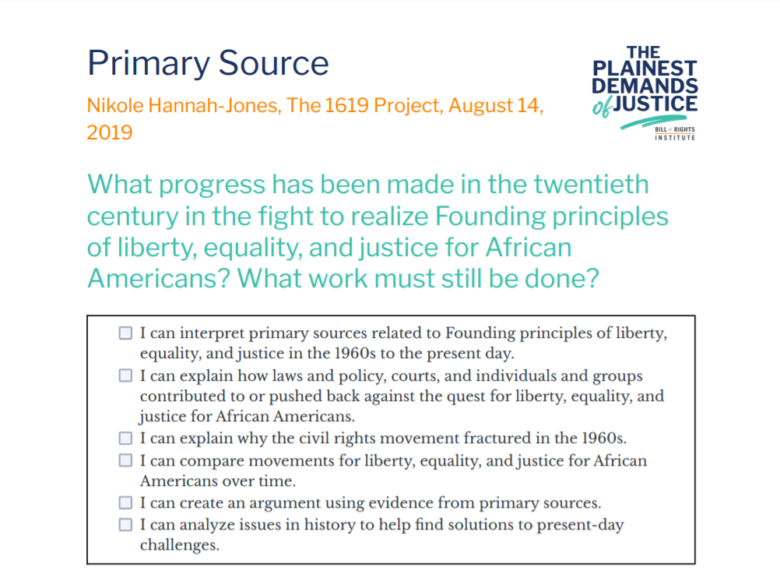 In 2019, journalist Nikole Hannah-Jones led an effort by The New York Times Magazine to reexamine the legacy of slavery in the United States. The 1619 Project featured a variety of essays by journalists and academics, as well as poems, short stories, and a photo essay that were timed to coincide with the 400th anniversary of the arrival of the first Africans in Virginia. Hannah-Jones won a Pulitzer Prize for Commentary for her work on the project. The following is taken from her essay introducing the project: “Our democracy’s founding ideals were false when they were written. Black Americans have fought to make them true.”

Before the abolishment of the international slave trade, 400,000 enslaved Africans would be sold into America. Those individuals and their descendants transformed the lands to which they’d been brought into some of the most successful colonies in the British Empire. Through backbreaking labor, they cleared the land across the Southeast. They taught the colonists to grow rice. They grew and picked the cotton that at the height of slavery was the nation’s most valuable commodity, accounting for half of all American exports and 66 percent of the world’s supply. They built the plantations of George Washington, Thomas Jefferson and James Madison, sprawling properties that today attract thousands of visitors from across the globe captivated by the history of the world’s greatest democracy. They laid the foundations of the White House and the Capitol, even placing with their unfree hands the Statue of Freedom atop the Capitol dome.

But it would be historically inaccurate to reduce the contributions of black people to the vast material wealth created by our bondage. Black Americans have also been, and continue to be, foundational to the idea of American freedom. More than any other group in this country’s history, we have served, generation after generation, in an overlooked but vital role: It is we who have been the perfecters of this democracy.

Without the idealistic, strenuous and patriotic efforts of black Americans, our democracy today would most likely look very different—it might not be a democracy at all.