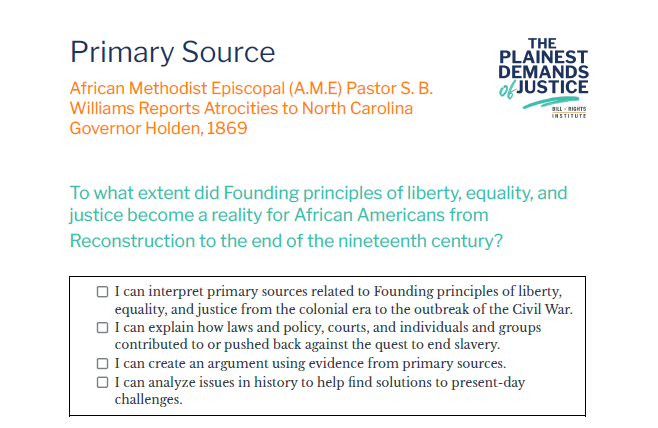 After the Civil War, white supremacists began organizing into opposition groups such as the White League and the Ku Klux Klan. Chief among these paramilitary groups was the Klan. In the period leading up to the 1868 presidential election, the Klan’s activities expanded across the South, including threats of violence, beatings, and murder to intimidate Republican voters. Black and white leaders in the South wrote of the Klan’s violence in their communities, pleading for help and condemning the violence they witnessed. Congress passed the Enforcement Acts between 1870 and 1871 in an attempt to protect African Americans’ right to vote, hold office, serve on juries, and receive equal protection of the laws as guaranteed by the Fourteenth Amendment. The main target of these acts was the Ku Klux Klan. The third Enforcement Act of 1871 made many of the KKK’s intimidation tactics into federal offenses and authorized the president to call out the military to suppress violence. With the formal end of Reconstruction in 1877, however, the laws were loosely enforced, and violence against African Americans routinely went unpunished.

The following letter to the North Carolina governor from an African Methodist Episcopal (A.M.E.) pastor and teacher describes the violence in his local community in Hillsboro.

I wish to inform your Honor of the state of things in Orange County. It appears that a number of the Ku Klux has taken in hand to murder up whom they may deem improper to live in the community.

You are no doubt acquainted with the fact that two young men of color were taken out of jail, one of shot and has since died from the effects of the wound. They also visited Chapel Hill of which your Honor is aware have been made acquainted. On last Monday night a week, they went some five miles below Hillsboro and took away a young man; on the pretense that they were a going to lodge him in jail.

Search was made for him but to no purpose. I have been creditably informed this morning that he has been found with his tongue torn out of his mouth and his throat cut.

My own life has been threatened; and I must be afraid to lie down at night.

Is there no way to put a stop to such outrages[?] Can not your Honor order out a special police as your own Police force to keep the peace of the community and the protection of loyal citizens[?]

Or if not order arms to be sent to some of us that we may protect ourselves. I think the other plan the best. Yet I would like to have arms but am to poor to buy them As inteligence has reached me that my life is threatened.

Fraternally yours
S. B. Williams, Pastor of the African Methodist Episcopal Church and Teacher of Freedman’s School