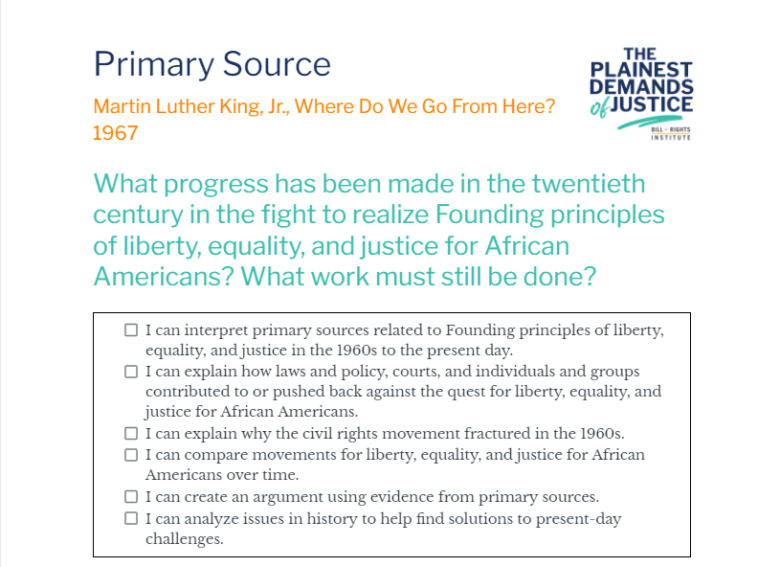 By 1967, Rev. Martin Luther King, Jr., and his allies had won several hard-fought victories for the civil rights movement with the passage of the Civil Rights Act of 1964 and the Voting Rights Act of 1965. The movement, however, was far from over. Many debated the appropriate paths it should take and the methods it should use. King considered these questions in the following speech, delivered to fellow members of the Southern Christian Leadership Conference (SCLC) in August 1967.

I want to say to you as I move to my conclusion, as we talk about “Where do we go from here?” that we must honestly face the fact that the movement must address itself to the question of restructuring the whole of American society. There are forty million poor people here, and one day we must ask the question, “Why are there forty million poor people in America?” . . . When you ask that question, you begin to question the capitalistic economy. And I’m simply saying that more and more, we’ve got to begin to ask questions about the whole society . . .

Now, when I say questioning the whole society, it means ultimately coming to see that the problem of racism, the problem of economic exploitation, and the problem of war are all tied together. These are the triple evils that are interrelated.

In other words, “Your whole structure must be changed.” A nation that will keep people in slavery for 244 years will “thingify” them and make them things. And therefore, they will exploit them and poor people generally economically . . .

What I’m saying today is that we must go from this convention and say, “America, you must be born again!”