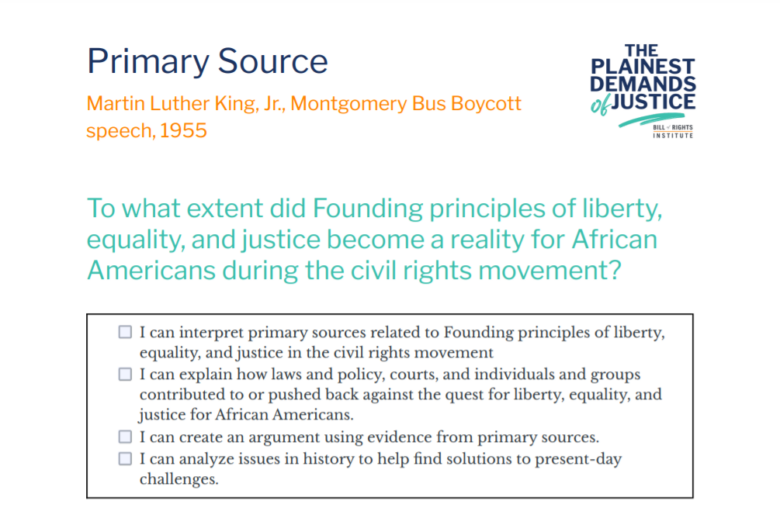 On December 1, 1955, Rosa Parks was arrested for refusing to give up her seat to a white passenger on a segregated bus. Four days later, a boycott of the Montgomery bus system was planned. On December 5, Dr. Martin Luther King, Jr., gave this speech, urging those who had just voted for the boycott to persevere in their struggle to obtain justice.

. . . We are here in a general sense because first and foremost we are American citizens and we are determined to apply our citizenship to the fullness of its meaning. We are here also because of our love for democracy, because of our deep-seated belief that democracy transformed from thin paper to thick action is the greatest form of government on earth. But we are here in a specific sense, because of the bus situation in Montgomery. We are here because we are determined to get the situation corrected. This situation is not at all new. The problem has existed over endless years. . . .

And certainly, certainly, this is the glory of America, with all of its faults. This is the glory of our democracy. If we were incarcerated [jailed] behind the iron curtains of a Communistic nation we couldn’t do this. If we were dropped in the dungeon of a totalitarian [a government with total control over its citizens] regime we couldn’t do this. But the great glory of American democracy is the right to protest for right.

We, the disinherited [deprived] of this land, we who have been oppressed so long, are tired of going through the long night of captivity. And now we are reaching out for the daybreak of freedom and justice and equality. . . . But I want to tell you this evening that it is not enough for us to talk about love, love is one of the pivotal points of the Christian face, faith. There is another side called justice. And justice is really love in calculation. Justice is love correcting that which revolts against love . . .