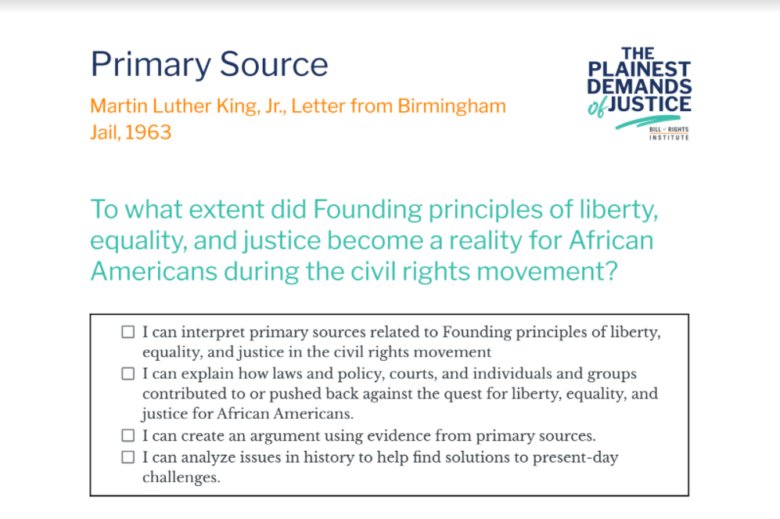 Martin Luther King, Jr., was the most famous civil rights activist of the 1960s. He called for nonviolent means, including sit-ins, boycotts, and marches, to end segregation in the South. In the early 1960s, Birmingham, Alabama, was one of the most segregated cities in the United States. King traveled there in 1963 to fight against racial discrimination and was arrested. After his arrest, a group of white religious leaders wrote him a letter criticizing the means and timing of his fight for greater equality. The civil rights leader penned a response while in a jail cell and then rewrote it for publication when he was freed.

While confined here in the Birmingham city jail, I came across your recent statement calling my present activities “unwise and untimely.” . . . Since I feel that you are men of genuine good will and that your criticisms are sincerely set forth, I want to try to answer your statement in what I hope will be patient and reasonable terms . . .

I am in Birmingham because injustice is here . . . I cannot sit idly by in Atlanta and not be concerned about what happens in Birmingham. Injustice anywhere is a threat to justice everywhere. We are caught in an inescapable network of mutuality, tied in a single garment of destiny . . .

You may well ask: “Why direct action? Why sit ins, marches and so forth? Isn’t negotiation a better path?” . . . Nonviolent direct action seeks to create such a crisis and foster such a tension that a community which has constantly refused to negotiate is forced to confront the issue. It seeks so to dramatize the issue that it can no longer be ignored . . .

You express a great deal of anxiety over our willingness to break laws. This is certainly a legitimate concern. Since we so diligently urge people to obey the Supreme Court’s decision of 1954 outlawing segregation in the public schools, it is rather strange and paradoxical to find us consciously breaking laws. One may well ask, “How can you advocate breaking some laws and obeying others?” The answer is found in the fact that there are two types of laws: there are just laws, and there are unjust laws. I would agree with St. Augustine that “An unjust law is no law at all.”

Now, what is the difference between the two? How does one determine when a law is just or unjust? A just law is a man-made code that squares with the moral law, or the law of God. An unjust law is a code that is out of harmony with the moral law. To put it in the terms of St. Thomas Aquinas, an unjust law is a human law that is not rooted in eternal and natural law. Any law that uplifts human personality is just. Any law that degrades human personality is unjust. All segregation statutes are unjust because segregation distorts the soul and damages the personality. It gives the segregator a false sense of superiority and the segregated a false sense of inferiority. To use the words of Martin Buber, the great Jewish philosopher, segregation substitutes an “I – it” relationship for the “I – thou” relationship and ends up relegating persons to the status of things. So segregation is not only politically, economically, and sociologically unsound, but it is morally wrong and sinful. Paul Tillich has said that sin is separation. Isn’t segregation an existential expression of man’s tragic separation, an expression of his awful estrangement, his terrible sinfulness? So I can urge men to obey the 1954 decision of the Supreme Court because it is morally right, and I can urge them to disobey segregation ordinances because they are morally wrong.

Let us consider a more concrete example of just and unjust laws. An unjust law is a code that a numerical or power majority group compels a minority group to obey but does not make binding on itself. This is difference made legal. By the same token, a just law is a code that a majority compels a minority to follow and that it is willing to follow itself. This is sameness made legal . . . I hope this letter finds you strong in the faith. I also hope that circumstances will soon make it possible for me to meet each of you, not as an integrationist [an activist whose goal was to integrate Blacks into white society] or a civil-rights leader but as a fellow clergyman and a Christian brother . . .