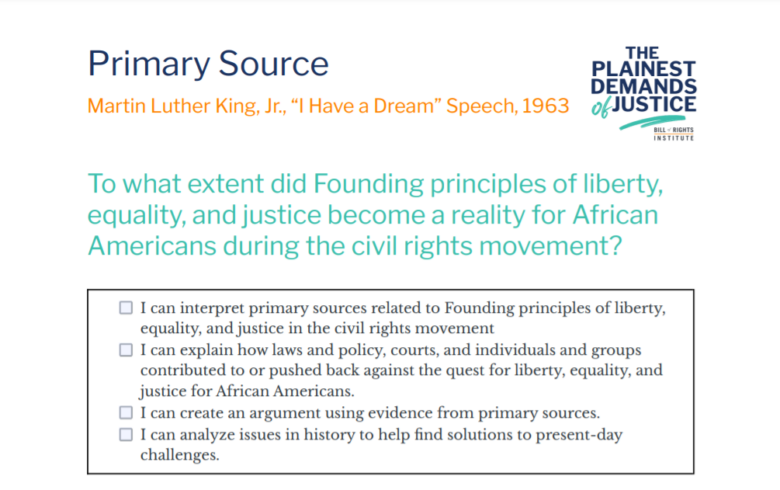 Following some successful efforts at desegregation in Birmingham, Alabama, civil rights activists moved to continue the momentum. On August 28, 1963, around 250,000 joined the March for Jobs and Freedom in Washington, DC, in a push for ending discrimination and segregation and airing a list of political, social, and economic claims for equality. Movement veteran Bayard Rustin worked diligently for months with a large staff of volunteers to organize the event, at which several leading civil rights activists spoke. What follows is arguably the best-known speech of that day, given by Rev. Martin Luther King, Jr.

I am happy to join with you today in what will go down in history as the greatest demonstration for freedom in the history of our nation.

Five score years ago, a great American, in whose symbolic shadow we stand today, signed the Emancipation Proclamation . . .

When the architects of our republic wrote the magnificent words of the Constitution and the Declaration of Independence, they were signing a promissory note [a promise in writing to repay a debt] to which every American was to fall heir. This note was a promise that all men, yes, black men as well as white men, would be guaranteed the “unalienable Rights” of “Life, Liberty and the pursuit of Happiness.” . . . Instead of honoring this sacred obligation, America has given the Negro people a bad check, a check which has come back marked “insufficient funds.” . . .

And so even though we face the difficulties of today and tomorrow, I still have a dream. It is a dream deeply rooted in the American dream.

I have a dream that one day this nation will rise up and live out the true meaning of its creed: “We hold these truths to be self-evident, that all men are created equal.”

I have a dream that my four little children will one day live in a nation where they will not be judged by the color of their skin but by the content of their character . . .

And when this happens, and when we allow freedom ring . . . we will be able to speed up that day when all of God’s children . . . will be able to join hands and sing in the words of the old Negro spiritual:

Thank God Almighty, we are free at last!