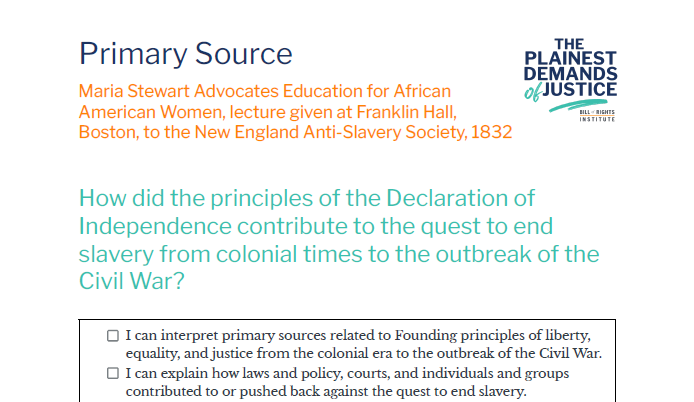 Many women found their political voice in joining the abolitionist cause, such as Maria Weston Chapman, Lydia Marie Child, and Angelina and Sarah Grimke. One important abolitionist was Maria Stewart, a remarkable free black woman and member of the vibrant free black community in Boston. Stewart addressed audiences of men at a time when it was considered improper for women to do so. She knew and was influenced by David Walker. She was self-educated, but spoke eloquently for the abolition of slavery and rights for all people. However, she did not limit her focus to ending slavery; she also urged her audiences to support equality for women. Stewart believed society was wasting the talents of women and argued that women should receive education and equal political rights.

Oh, do not say you cannot make anything of your children; but say, with the help and assistance of God, we will try. Perhaps you will say that you cannot send them to high schools and academies. You can have them taught in the first rudiments of useful knowledge, and then you can have private teachers, who will instruct them in the higher branches.

It is of no use for us to sit with our hands folded, hanging our heads like bulrushes lamenting our wretched condition; but let us make a mighty effort and arise. Let every female heart become united, and let us raise a fund ourselves; and at the end of one year and a half, we might be able to lay the cornerstone for the building of a high school, that the higher branches of knowledge might be enjoyed by us…