From 1910 to 1930, approximately 1.6 million southern Black Americans moved north, motivated by their experience of segregation, sharecropping, disfranchisement, violence, and racism in the South. Industrial jobs lured many to the North, where they found themselves able to vote and even be elected to office, and vibrant Black neighborhoods with distinct cultures grew in northern cities. Despite the heavy discrimination they still encountered, particularly in employment and housing, Black southerners began to build communities in the North, prompting family and neighbors to join the migration. During World War I, as the United States geared up for war and northern white factory workers joined the armed forces, the number of Black migrants increased dramatically. One scholar writing in 1920 commented, “They left as though they were feeing some curse.” 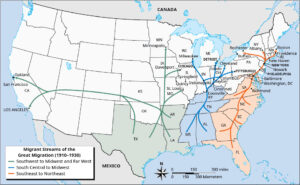 “Great Migration” by Bill of Rights Institute/Flickr, CC BY 4.0

This map shows the migrant streams of southern African Americans during the Great Migration from 1910 to 1930.