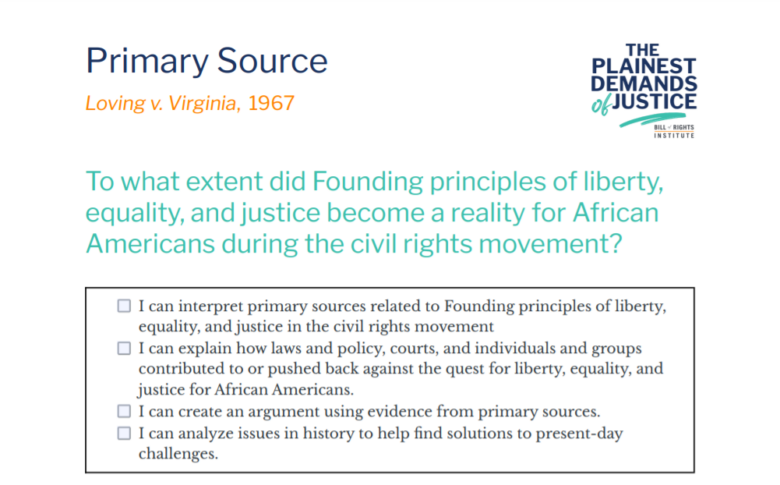 In 1958, two residents of Virginia, Mildred Jeter, a Black woman, and Richard Loving, a white man, were married in the District of Columbia. The Lovings then returned to Virginia and there were charged with violating the state’s anti-miscegenation law, which banned interracial marriages. They were found guilty and sentenced to a year in jail. The trial judge agreed to suspend the sentence if the Lovings would leave Virginia and not return for 25 years. The couple left the state with their children, but they missed their families and lives back in Virginia. The American Civil Liberties Union (ACLU) helped the Lovings bring their case all the way to the Supreme Court, which issued the following unanimous decision.

This case presents a constitutional question never addressed by this Court: whether a statutory [legal] scheme adopted by the State of Virginia to prevent marriages between persons solely on the basis of racial classifications violates the Equal Protection and Due Process Clauses of the Fourteenth Amendment.

For reasons which seem to us to reflect the central meaning of those constitutional commands, we conclude that these statutes cannot stand consistently with the Fourteenth Amendment. . . . Marriage is one of the ‘basic civil rights of man,’ fundamental to our very existence and survival. . . . To deny this fundamental freedom on so unsupportable a basis as the racial classifications embodied in these statutes, classifications so directly subversive of the principle of equality at the heart of the Fourteenth Amendment, is surely to deprive all the State’s citizens of liberty without due process of law. The Fourteenth Amendment requires that the freedom of choice to marry not be restricted by invidious [discriminatory] racial discriminations. Under our Constitution, the freedom to marry or not marry, a person of another race resides with the individual and cannot be infringed by the State.

These convictions must be reversed. It is so ordered.