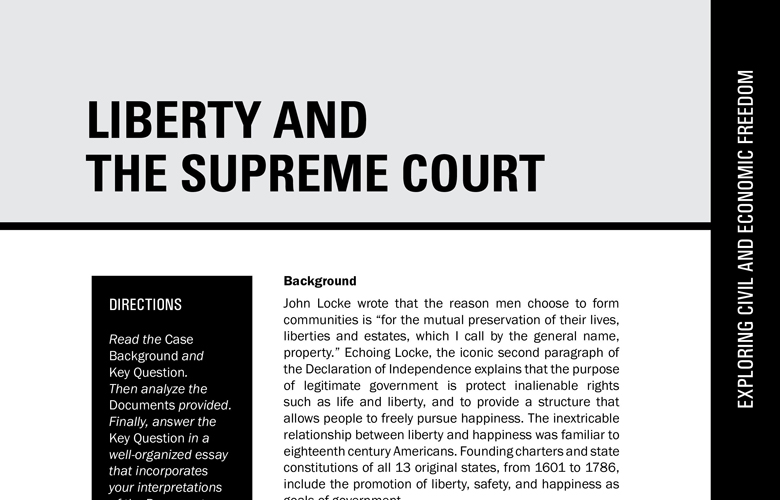 Read the Case Background and Key Question.Then analyze the Documents provided.Finally, answer the Key Question in a well-organized essay that incorporates your inter pretations of the Documents as well as your own knowledge of history

John Locke wrote that the reason men choose to form communities is “for the mutual preservation of their lives, liberties and estates, which I call by the general name, property.” Echoing Locke, the iconic second paragraph of the Declaration of Independence explains that the purpose of legitimate government is protect inalienable rights such as life and liberty, and to provide a structure that allows people to freely pursue happiness. The inextricable relationship between liberty and happiness was familiar to eighteenth century Americans. Founding charters and state constitutions of all 13 original states, from 1601 to 1786, include the promotion of liberty, safety, and happiness as goals of government.

To Americans of the seventeenth and eighteenth centuries, “happiness” encompassed much more than just individual pleasure, but also referred to the freedom to take care of oneself and one’s family, to build wealth, and enjoy the fruits of one’s labor. Happiness was attained by living in liberty and by practicing virtue. The Oxford English Dictionary includes this citation from Isaac Watts’s Logick in 1725: “Happiness consists in the attainment of the highest and most lasting natural good.”

Also included in the understanding of liberty in early America was the right to control one’s own property. Locke’s definition of property included “estates” – physical possessions like land and cattle – but also included the “liberty to follow my own will in all things” within a structure that protects that same liberty for everyone else. In his essay On Property (1792), James Madison also emphasized the connection between liberty and property. It was the natural right of all individuals to create, obtain, and control their possessions, beliefs, faculties, and opinions, as well as the fruits of their labor.

This document-based question explores the ways the concepts of liberty and property have been understood over time in the United States, and in particular how the Supreme Court has interpreted the right to liberty.