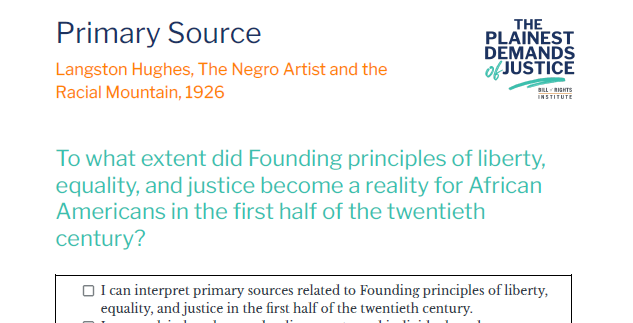 Langston Hughes was one of the most famous writers of the Harlem Renaissance, the cultural and intellectual blossoming of African American art in the 1920s and 1930s. He is best known for his poetry, but he also wrote novels, plays, short stories, and essays. In the following essay, he explores the idea of being Black and an artist. Hughes wanted to tell the stories of his people in ways that reflected their culture, including their love of music, laughter, and language itself alongside their suffering.

Langston Hughes, The Negro Artist and the Racial Mountain, 1926

One of the most promising of the young Negro poets said to me once, “I want to be a poet—not a Negro poet,” meaning, I believe, “I want to write like a white poet”; meaning subconsciously, “I would like to be a white poet”; meaning behind that, “I would like to be white.” And I was sorry the young man said that, for no great poet has ever been afraid of being himself. And I doubted then that, with his desire to run away spiritually from his race, this boy would ever be a great poet. But this is the mountain standing in the way of any true Negro art in America—this urge within the race toward whiteness . . . to be as little Negro and as much American as possible. . . .