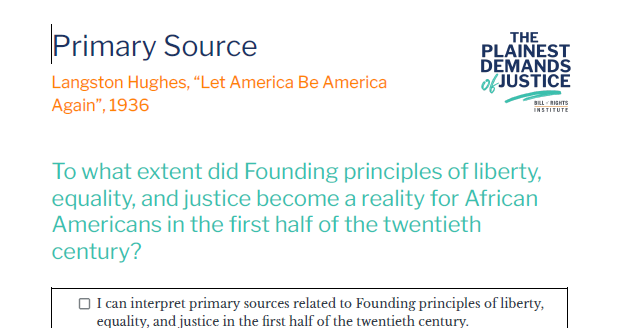 Langston Hughes was one of the most famous writers of the Harlem Renaissance, the cultural and intellectual revival of African American art in the 1920s and 1930s. Hughes is most well-known for his poetry, but he also wrote novels, plays, short stories, and essays. Hughes published his first book of poems in 1926. In the following poem, he expressed both the “American Dream” of liberty and equal opportunity and the reality of the hardships and inequality faced by African Americans.

O, let my land be a land where Liberty
Is crowned with no false patriotic wreath,
But opportunity is real, and life is free,
Equality is in the air we breathe.

(There’s never been equality for me,
Nor freedom in this “homeland of the free.”)

I am the poor white, fooled and pushed apart,
I am the Negro bearing slavery’s scars.
I am the red man driven from the land,
I am the immigrant clutching the hope I seek—
And finding only the same old stupid plan
Of dog eat dog, of mighty crush the weak.
. . .

O, let America be America again—
The land that never has been yet—
And yet must be—the land where every man is free.
The land that’s mine—the poor man’s, Indian’s,
Negro’s, ME—
Who made America,
Whose sweat and blood, whose faith and pain,
Whose hand at the foundry, whose plow in the rain,
Must bring back our mighty dream again.

Sure, call me any ugly name you choose—
The steel of freedom does not stain.
From those who live like leeches on the people’s lives,
We must take back our land again,
America!

O, yes,
I say it plain,
America never was America to me,
And yet I swear this oath—
America will be!