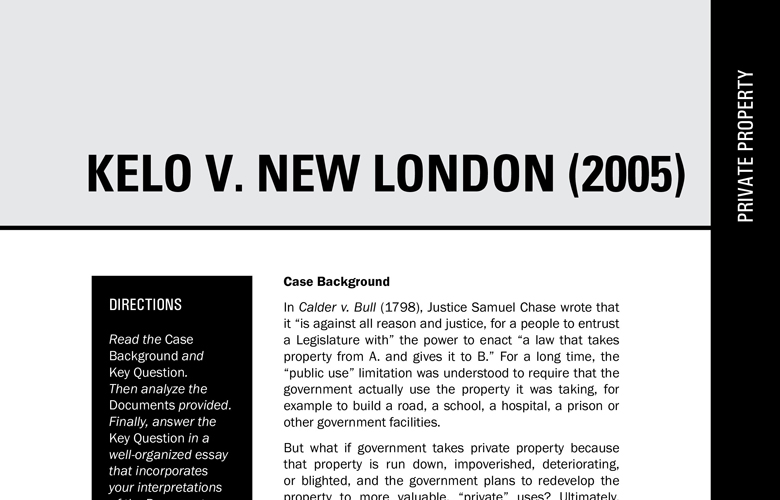 In Calder v. Bull (1798), Justice Samuel Chase wrote that it “is against all reason and justice, for a people to entrust a Legislature with” the power to enact “a law that takes property from A. and gives it to B.” For a long time, the “public use” limitation was understood to require that the government actually use the property it was taking, for example to build a road, a school, a hospital, a prison or other government facilities.

But what if government takes private property because that property is run down, impoverished, deteriorating, or blighted, and the government plans to redevelop the property to more valuable, “private” uses? Ultimately, this question has proven difficult and controversial for the Supreme Court.

The Court first addressed these issues in Berman v. Parker (1954), a case in which the Court upheld a redevelopment plan targeting a blighted area of Washington, D.C. The Court unanimously held that the plan involved a “public use” because the plan, as a whole, served public purposes, even though much of the property would be leased or sold to private parties.

In 1998, the pharmaceutical company Pfizer built a new facility in New London, Connecticut. Seeking to improve the economic outlook of the area, the city’s New London Development Corporation offered to sell Pfizer additional land where the drug company would build a large resort/ marina/condominium complex. Most of the residents of the affected neighborhoods accepted the city’s offer to purchase their property. However, Susette Kelo was one of 15 property owners who refused to sell. They maintained that the government does not have the constitutional power to take private property in order to turn it over to a private developer. The city then invoked its power of eminent domain in order to take the land. In Kelo v. New London, the Supreme Court was asked to determine whether the “public purpose” as intended by city government was the same thing as the Fifth Amendment’s “public use.”