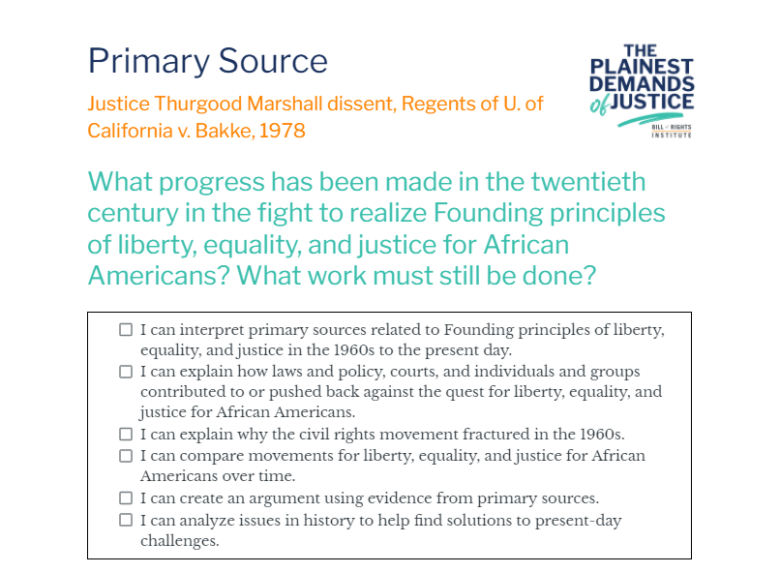 . . . today’s judgment ignores the fact that for several hundred years Negroes have been discriminated against, not as individuals, but rather solely because of the color of their skins. It is unnecessary in 20th-century America to have individual Negroes demonstrate that they have been victims of racial discrimination; the racism of our society has been so pervasive that none, regardless of wealth or position, has managed to escape its impact. The experience of Negroes in America has been different in kind, not just in degree, from that of other ethnic groups. It is not merely the history of slavery alone but also that a whole people were marked as inferior by the law. And that mark has endured. The dream of America as the great melting pot has not been realized for the Negro; because of his skin color he never even made it into the pot.

These differences in the experience of the Negro make it difficult for me to accept that Negroes cannot be afforded greater protection under the Fourteenth Amendment where it is necessary to remedy the effects of past discrimination. . . .

It is because of a legacy of unequal treatment that we now must permit the institutions of this society to give consideration to race in making decisions about who will hold the positions of influence, affluence, and prestige in America. For far too long, the doors to those positions have been shut to Negroes. If we are ever to become a fully integrated society, one in which the color of a person’s skin will not determine the opportunities available to him or her, we must be willing to take steps to open those doors. I do not believe that anyone can truly look into America’s past and still find that a remedy for the effects of that past is impermissible.

I fear that we have come full circle. After the Civil War our Government started several “affirmative action” programs. This Court in the Civil Rights Cases and Plessy v. Ferguson destroyed the movement toward complete equality. For almost a century no action was taken, and this nonaction was with the tacit approval of the courts. Then we had Brown v. Board of Education and the Civil Rights Acts of Congress, followed by numerous affirmative-action programs. Now, we have this Court again stepping in, this time to stop affirmative-action programs of the type used by the University of California.