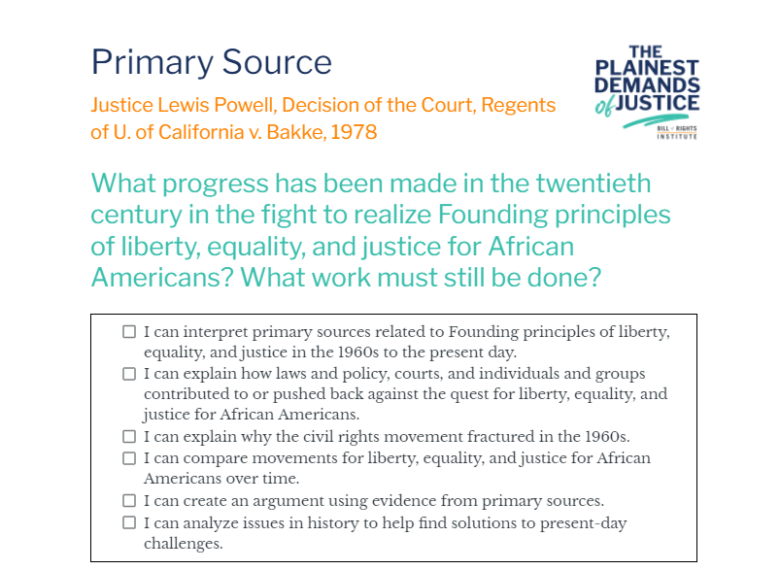 Regents of the University of California v. Bakke was a case brought to the Supreme Court over the use of affirmative action in the college admission process. As part of its affirmative action program, the University of California at Davis Medical School reserved 16 of the 100 places in each entering class for “qualified” minorities in an effort to redress the long-standing exclusion of minorities from the medical profession. Allan Bakke, a white man, was twice rejected by the school, though his GPA and test scores exceeded those of the minority students who were admitted each year he was rejected. Bakke sued for violation of the Equal Protection Clause of the Fourteenth Amendment and Title VI of the Civil Rights Act. Ultimately, the Supreme Court justices ruled that the school could use race as a factor in admissions for affirmative action but could not have a quota system because that violated the Equal Protection Clause.

Justice Lewis Powell, Decision of the Court, Regents of U. of California v. Bakke, 1978

JUSTICE POWELL announced the judgment of the Court.

. . . the special admissions program is undeniably a classification based on race and ethnic background. To the extent that there existed a pool of at least minimally qualified minority applicants to fill the 16 special admissions seats, white applicants could compete only for 84 seats in the entering class, rather than the 100 open to minority applicants. Whether this limitation is described as a quota or a goal, it is a line drawn on the basis of race and ethnic status.

. . . when a State’s distribution of benefits or imposition of burdens [in this case, the benefit of admissions to the medical school] hinges on ancestry or the color of a person’s skin, that individual is entitled to a demonstration that the challenged classification is necessary to promote a substantial state interest. Petitioner [the medical school] has failed to carry this burden . . .

In enjoining the petitioner [the medical school] from ever considering the race of any applicant, however, the courts below failed to recognize that the State has a substantial interest that legitimately may be served by a properly devised admissions program involving the competitive consideration of race and ethnic origin. . . .