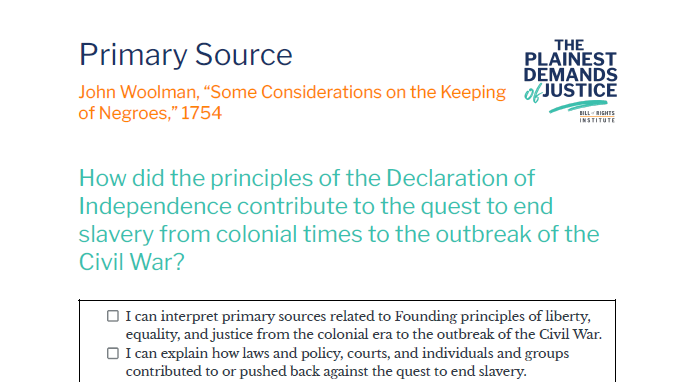 Quaker objections to slavery continued throughout the colonial period, though some Quakers were slaveholders themselves. John Woolman worked in various trades but was primarily a traveling Quaker preacher. He became increasingly critical of slaveholding and published “Some Considerations on the Keeping of Negroes” in 1754 to denounce slavery and advocate abolitionism.

“Some Considerations on the Keeping of Negroes”

If I purchase a man who has never forfeited his liberty, the natural right of freedom is in him; and shall I keep him and his posterity [children or future generations] in servitude and ignorance? ‘How should I approve of this conduct, were I in his circumstances, and he in mine?’… We may further consider, that they are now amongst us, and people of our nation were the cause of their being here; that whatsoever difficulty accrues thereon, we are justly chargeable with, and to bear all inconveniences attending it with a serious and weighty concern of mind to do our duty by them, is the best we can do.