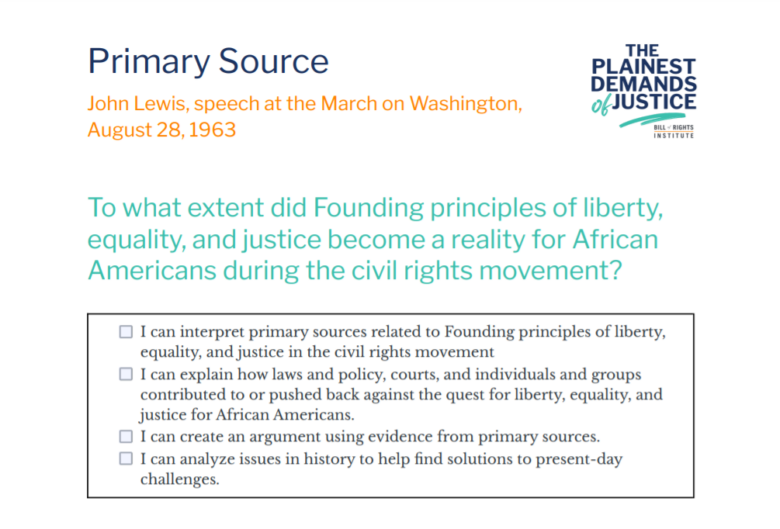 While Martin Luther King, Jr.’s, “I Have a Dream” speech is the most widely known from the 1963 March on Washington for Jobs and Freedom, other prominent civil rights activists spoke that day. One of those was John Lewis, the chair of the Student Nonviolent Coordinating Committee (SNCC), who continued fighting for civil rights in the first Selma to Montgomery March. Lewis later represented Georgia’s 5th congressional district in the House of Representatives from 1987 until his death in 2020.

We march today for jobs and freedom, but we have nothing to be proud of. For hundreds and thousands of our brothers are not here. For they are receiving starvation wages, or no wages at all… My friends, let us not forget that we are involved in a serious social revolution. By and large, American politics is dominated by politicians who build their careers on immoral compromises and ally themselves with open forms of political, economic, and social exploitation . . . Where is our party? Where is the political party that will make it unnecessary to march on Washington?

To those who have said, “Be patient and wait,” we have long said that we cannot be patient. We do not want our freedom gradually, but we want to be free now! We are tired. We are tired of being beaten by policemen. We are tired of seeing our people locked up in jail over and over again. And then you holler, “Be patient.” How long can we be patient? We want our freedom, and we want it now. We do not want to go to jail. But we will go to jail if this is the price we must pay for love, brotherhood, and true peace . . .

By the force of our demands, our determination, and our numbers, we shall splinter the segregated South into a thousand pieces and put them together in the image of God and democracy. We must say: “Wake up America! Wake up!” For we cannot stop, and we will not and cannot be patient.