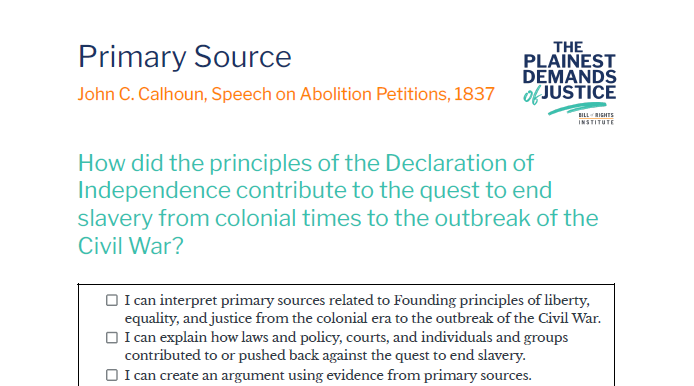 As the lucrative cotton economy and dependence on slave labor expanded in the lower South, abolitionists like William Lloyd Garrison grew louder in their attacks on slavery and southern culture. In response, several white southerners produced a new defense of slavery. In his 1837 Speech on Abolition Petitions, John C. Calhoun, then a U.S. senator for South Carolina, defended the institution of slavery.

Abolition and the Union cannot coexist. . . We of the South will not, cannot, surrender our institutions. To maintain the existing relations between the two races, inhabiting that section of the Union, is indispensable to the peace and happiness of both. It cannot be subverted without drenching the country in blood, and extirpating [removing or exiling] one or the other of the races. Be it good or bad, [slavery] has grown up with our society and institutions, and is so interwoven with them that to destroy it would be to destroy us as a people. But let me not be understood as admitting, even by implication, that the existing relations between the two races in the slaveholding states is an evil: far otherwise; I hold it to be a good, as it has thus far proved itself to be to both…I appeal to facts. Never before has the black race of central Africa, from the dawn of history to the present day, attained a condition so civilized and so improved, not only physically, but morally and intellectually . . .

I hold that in the present state of civilization, where two races of different origin, and distinguished by color, and other physical differences, as well as intellectual, are brought together, the relation now existing in the slaveholding states between the two, is, instead of an evil, a good—a positive good. . . .