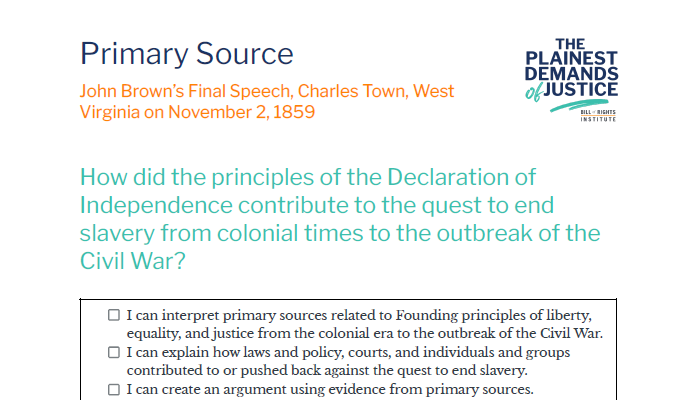 John Brown was a radical abolitionist who believed that murder was morally permissible if committed against slave-holders. After passage of the Kansas-Nebraska Act, he and his sons moved to Kansas and perpetrated violence against slaveholding families. In October 1959, Brown intended to lead an army in a raid of the federal arsenal at Harpers Ferry in Virginia. He planned to seize the weapons and then distribute them to liberated slaves to kill their masters and flee to a revolutionary state in the mountains of Virginia. The raid failed, and Brown was tried and convicted of murder, inciting slave insurrection (rebellion), and treason against the state of Virginia. At his sentencing, he delivered his final statement, which was reprinted in papers across the country. The raid and Brown’s subsequent execution only further fueled the sectionalism driving the country toward Civil War, because abolitionists saw him as a heroic martyr, and many Southerners saw him as a dangerous villain.

. . . The court acknowledges, as I suppose, the validity of the law of God. I see a book kissed here which I suppose to be the Bible, or at least the New Testament. That teaches me that all things whatsoever I would that men should do to me, I should do even so to them. It teaches me further to “remember them that are in bonds, as bound with them.” I endeavored to act up to that instruction. I say, I am too young to understand that God is any respecter of persons. I believe that to have interfered as I have done — as I have always freely admitted I have done — in behalf of His despied poor, was not wrong, but right. Now if it is deemed necessary that I should forfeit my life for the furtherance of the ends of justice, and mingle my blood further with the blood of my children and with the blood of millions in this slave country whose rights are disregarded by wicked, cruel, and unjust enactments. — I submit; so let it be done!