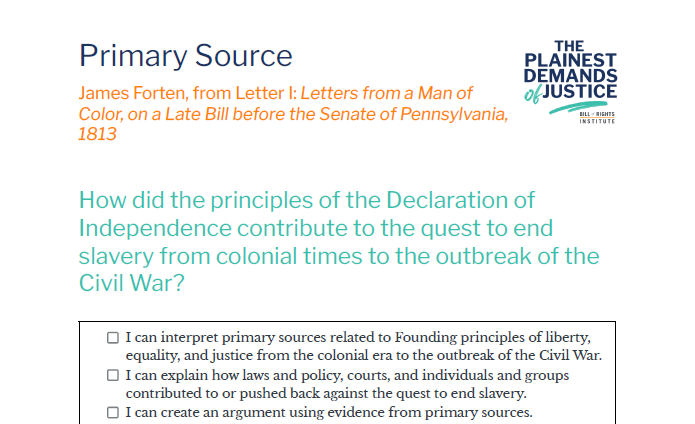 James Forten was born into a family of free African Americans in Philadelphia. During the American Revolution, he served the colonists’ cause aboard a privateer ship. After the war, he went into business and acquired extensive real-estate holdings in Philadelphia. A noted abolitionist, Forten wrote the following essay in response to a proposed bill that would limit the rights of African Americans in Pennsylvania. The bill did not pass.

Letters from a Man of Color, on a Late Bill before the Senate of Pennsylvania, 1813

We hold this truth to be self-evident, that God created all men equal, and is one of the most prominent features in the Declaration of Independence, and in that glorious fabric of collected wisdom, our noble Constitution. This idea embraces the Indian and the European, the Savage and the Saint, the Peruvian and the Laplander, the white Man and the African, and whatever measures are adopted subversive of this inestimable privilege, are in direct violation of the letter and spirit or our Constitution. . . .

Many of our ancestors were brought here more than one hundred years ago, and many of our fathers, many of ourselves, have fought and bled for the Independence of our country . . . Let not the spirit of the father behold the son robbed of that Liberty which he died to establish. . . .

A MAN OF COLOUR.