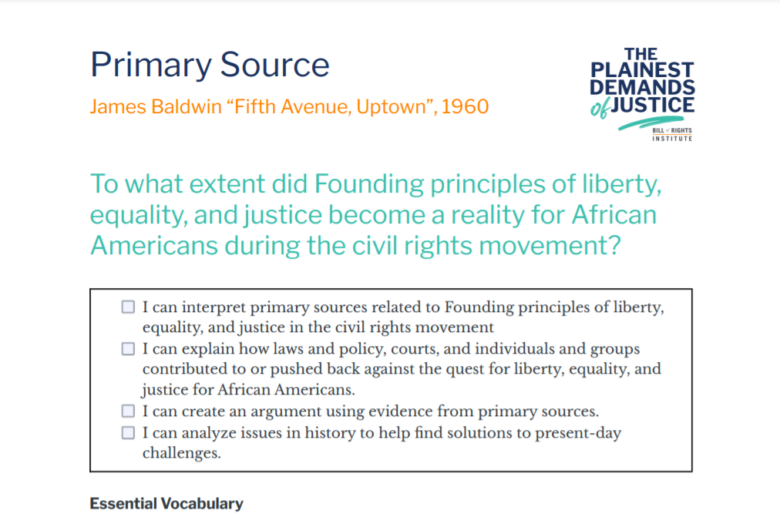 James Baldwin was a Black novelist, essayist, and speaker who had been raised in poverty in Harlem but discovered a gift for writing. In the early 1950s, he published his first novel, Go Tell It on the Mountain, and wrote essays for several high-profile magazines. His writings describe the Black experience and the search for meaning and dignity. In 1963, he published his most famous work, The Fire Next Time, outlining Black Americans’ rising frustration with and anger about inequality. In the following essay, Baldwin described Harlem for Esquire magazine.

. . . The projects are hideous, of course, there being a law, apparently respected throughout the world, that popular housing shall be as cheerless as a prison. They are lumped all over Harlem, colorless, bleak, high, and revolting. The wide windows look out on Harlem’s invincible and indescribable squalor: the Park Avenue railroad tracks, around which, about forty years ago, the present dark community began; the unrehabilitated houses, bowed down, it would seem, under the great weight of frustration and bitterness they contain. . . .

Similarly, the only way to police a ghetto is to be oppressive. None of Commissioner Kennedy’s [New York City Police Commissioner Stephen Kennedy] policemen, even with the best will in the world, have any way of understanding the lives led by the people they swagger about in two’s and three’s controlling. Their very presence is an insult, and it would be, even if they spent their entire day feeding gumdrops to children. They represent the force of the white world, and that world’s real intentions are, simply, for that world’s criminal profit and ease, to keep the black man corralled up here, in his place. The badge, the gun in the holster, and the swinging club make vivid what will happen should his rebellion become overt. Rare, indeed, is the Harlem citizen, from the most circumspect church member to the most shiftless adolescent, who does not have a long tale to tell of police incompetence, injustice, or brutality. I myself have witnessed and endured it more than once. . .

It is a terrible, an inexorable [inevitable], law that one cannot deny the humanity of another without diminishing one’s own: in the face of one’s victim, one sees oneself. Walk through the streets of Harlem and see what we, this nation, have become.