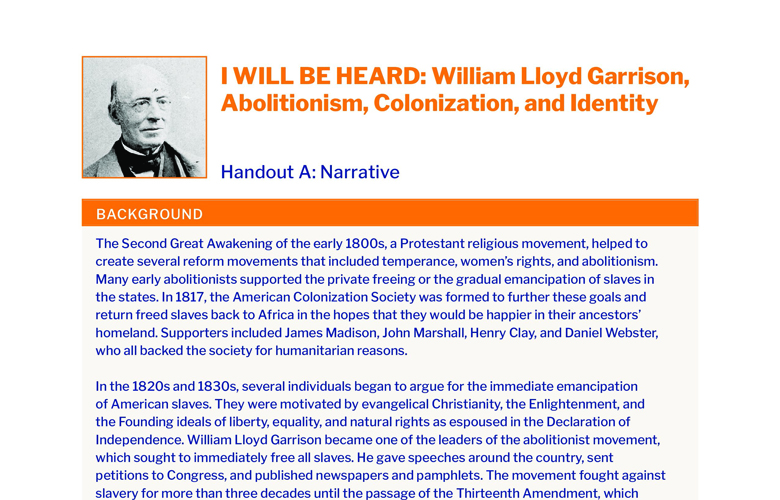 The Second Great Awakening of the early 1800s, a Protestant religious movement, helped to create several reform movements that included temperance, women’s rights, and abolitionism. Many early abolitionists supported the private freeing or the gradual emancipation of slaves in the states. In 1817, the American Colonization Society was formed to further these goals and return freed slaves back to Africa in the hopes that they would be happier in their ancestors’ homeland. Supporters included James Madison, John Marshall, Henry Clay, and Daniel Webster, who all backed the society for humanitarian reasons.

In the 1820s and 1830s, several individuals began to argue for the immediate emancipation of American slaves. They were motivated by evangelical Christianity, the Enlightenment, and the Founding ideals of liberty, equality, and natural rights as espoused in the Declaration of Independence. William Lloyd Garrison became one of the leaders of the abolitionist movement, which sought to immediately free all slaves. He gave speeches around the country, sent petitions to Congress, and published newspapers and pamphlets. The movement fought against slavery for more than three decades until the passage of the Thirteenth Amendment, which freed all slaves at the end of the Civil War.

In March 1828, Garrison, then a 23-year-old newspaper editor, had dinner at Reverend William Collier’s boardinghouse with a guest, Benjamin Lundy. During their conversation, Lundy thundered, “I shall not hesitate to call things by their proper names, nor yet refrain from speaking the truth.” These words, among other ideals that Lundy stated, made deep impressions on Garrison, and would change the young man’s life.

Under Lundy’s influence, Garrison’s ideas about slavery would change as he developed into the nation’s leading abolitionist. Garrison would later write, “I feel that I owe everything instrumentally and under God, to Benjamin Lundy.”

At the time of meeting Lundy, Garrison was the editor of the National Philanthropist, and a devout evangelical Christian who was deeply involved with reform movements, particularly temperance and world peace. He also supported the gradual emancipation of slaves and their return to Africa, a popular movement at the time organized around the efforts of the American Colonization Society. NARRATIVE

During a stint as an editor for a partisan newspaper in Vermont, Journal of the Times, Garrison supported the “gradual emancipation of every slave in the republic” and the “transportation of such liberated slaves and free colored peoples as are desirous of emigrating to a more genial [climate]” in Africa. He believed following this doctrine was the “duty of every patriot and Christian” and was based upon “wisdom and humanity.” Immediate emancipation was “most assuredly out of the question,” so he didn’t advocate for it. However, Garrison’s reformist ideas began to center more on abolitionism over the next few years until it became the focus of his identity.

On July 4, 1829, Garrison walked six blocks from his rooming house to Park Street Church to deliver an Independence Day speech. Garrison used the patriotic occasion to point out that slavery conflicted with America’s most cherished ideals of liberty, equality, and self-government. Free and enslaved African Americans “possess the same inherent and inalienable rights as ours,” he asserted from the pulpit. He called slavery a “national sin” and supported the gradual emancipation of slaves.

Soon after, Garrison accepted Lundy’s offer of moving to Baltimore to publish an anti-slavery newspaper, The Genius of Universal Emancipation. Lundy persuaded Garrison to support immediate emancipation and equal rights in America, instead of colonization, as moral imperatives. Soon, Garrison was publicly asserting that colonization was an “uncertain” method of attacking slavery that was unrealistic, considering the vast number of slaves in America. Still, he stated that he would not oppose continuing colonization efforts. He defended the “immediate and complete emancipation of slaves” and shed any support for gradual emancipation.

His stance was increasingly uncompromising and led to a libel lawsuit and state charges, for which he served a jail term from April to June, 1830. He was unapologetic for his words, stating, “My pen cannot remain idle, nor my voice be suppressed, nor my heart cease to bleed, while two millions of my fellow beings wear the shackles of slavery in my own guilty country.”

Garrison and Lundy had a falling out after the jail sentence and unfavorable publicity. Garrison returned to Boston that autumn because he thought many of the ministers and public figures there who supported gradual emancipation and colonization could be converted to his more radical views. He received financial backing and launched a newspaper, The Liberator, dedicated to his new abolitionist principles.

The inaugural edition of The Liberator, published on January 1, 1831, laid out Garrison’s anti- slavery views. He wrote that since he found New England so lethargic on emancipation, he would “lift up the standard of emancipation in the eyes of the nation, within sight of Bunker Hill and in the birth place of liberty.” Garrison then publicly apologized for his own previous “unreflecting” support for the “popular but pernicious doctrine of gradual abolition” that he had previously advocated. “I seize this opportunity to make a full and unequivocal recantation and thus publicly ask pardon of my God, of my country, and of my brethren the poor slaves, for having uttered a sentiment so full of timidity, injustice, and absurdity,” Garrison stated.

Garrison’s identity was also marked by an increasing unwillingness to compromise. “I will be as harsh as truth, and as uncompromising as justice. On this subject I do not wish to think or speak, or write, with moderation. No! No! Tell a man whose house is on fire to give a moderate alarm . . . but urge me not to use moderation in a cause like the present.” He demonstrated his identification with his cause when he finished: “I am in earnest – I will not equivocate – I will not excuse – I will not retreat a single inch – AND I WILL BE HEARD.”

Garrison’s views were developed by an important mentor in his life. He went from supporting gradual emancipation and colonization back to Africa to being committed to an uncompromising view of justice for African Americans that involved immediate emancipation. His identity came to focus on helping blacks win the promise of equality and justice as established in the Declaration of Independence, a commitment he tirelessly pursued.