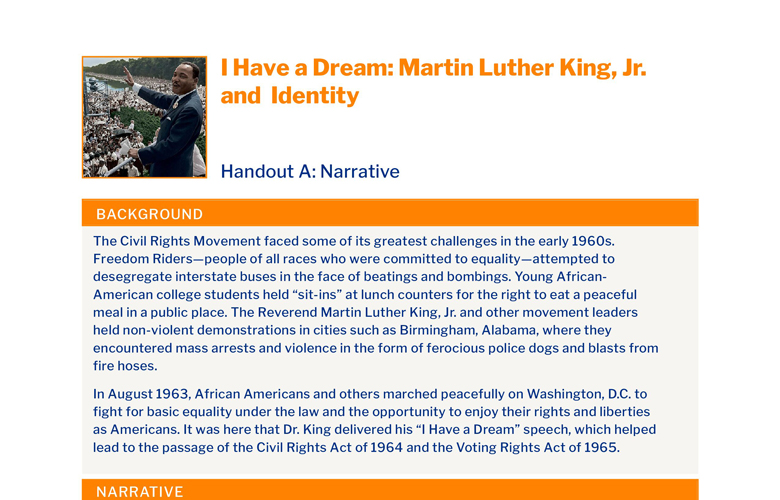 The Civil Rights Movement faced some of its greatest challenges in the early 1960s. Freedom Riders—people of all races who were committed to equality—attempted to desegregate interstate buses in the face of beatings and bombings. Young African- American college students held “sit-ins” at lunch counters for the right to eat a peaceful meal in a public place. The Reverend Martin Luther King, Jr. and other movement leaders held non-violent demonstrations in cities such as Birmingham, Alabama, where they encountered mass arrests and violence in the form of ferocious police dogs and blasts from fire hoses.

In August 1963, African Americans and others marched peacefully on Washington, D.C. to fight for basic equality under the law and the opportunity to enjoy their rights and liberties as Americans. It was here that Dr. King delivered his “I Have a Dream” speech, which helped lead to the passage of the Civil Rights Act of 1964 and the Voting Rights Act of 1965.

On the morning of August 28, 1963, an exhausted King looked outside his window of the Willard Hotel in Washington, D.C. Hundreds of thousands of black Americans and their supporters were expected to attend the March on Washington for civil rights, but King did not see any crowds. He conferred with his wife, Coretta Scott King, who reassured her husband that the marchers would come.

King had prepared his speech for the March during a busy week. He had visited his Southern Christian Leadership Conference offices in Atlanta, traveled to Washington for a television appearance on Meet the Press, and then flew to New York for a meeting about his manuscript on the recent Birmingham marches. He had a lengthy draft of the speech when he and Coretta had checked into the hotel the night before, but met with several aides in the lobby to finalize it. After some deliberation, King excused himself, stating, “My brothers, I understand. I appreciated all your suggestions. Now let me go and counsel with the Lord.” With that, he returned to his suite and continued outlining and writing the speech in longhand until well past midnight, seeking the right rhythm and words.

King had been identified as a leader of the civil rights movement ever since his involvement in the Montgomery Bus Boycott nearly a decade before. He was a highly effective speaker because of his study of oratory and rhetoric both as an undergraduate and while earning his doctorate at Boston University. King possessed a profound moral vision of civil rights and equality for African Americans, which he communicated through his excellent oratorical abilities and demonstrated through his courage on the front lines of demonstrations. He was also a minister who delivered resounding sermons and was deeply familiar with the language of the King James Bible. His preaching was a source of strength for expressing the ideals of the civil rights movement and never would it be more important than during the March on Washington.

At about 10:00 a.m., worries about participation faded as King saw African Americans, white Americans, clergy members, union members, and young people crowded onto the Mall near the Washington Monument. Soon, under the increasingly hot summer sun, around 250,000 marchers appeared. They had traveled by train, bus, car, and even foot from across the country—some from as far as Los Angeles. They were singing movement songs, praying together, listening to early entertainment, eating their packed lunches, and finally assembling at the steps of the Lincoln Memorial while singing “We Shall Overcome.”

A slate of speakers addressed the crowd to a mixed reaction and polite, sometimes enthusiastic, applause. King had prepared to speak for five minutes, but his aides persuaded him to go longer. “They [are coming] for you,” they told him. Finally, A. Philip Randolph, a long- time civil rights activist, introduced King, calling him the “moral leader of our nation,” who was seeking to “bring about social change for the advancement of justice and freedom and human dignity.” The assembly yelled, “Hip, hip, hooray!” three times to welcome King while he stepped up to the podium and settled in before the numerous microphones. The major television networks interrupted their regular programming to broadcast King’s speech.

Standing in front of the statue of the Great Emancipator, King struck a Lincolnian note: “Five score years ago, a great American, in whose symbolic shadow we stand today, signed the Emancipation Proclamation.” Next, King praised the Founders as the “architects of our republic” who wrote the “magnificent words of the Constitution and the Declaration of Independence.” According to King, the Founders created a system based upon the idea that universal rights were embedded in the very nature of all human beings.

King called the equality principle a “promissory note to which every American was to fall heir.” He went on, stating, “this note was a promise that all men, yes, black men as well as white men, would be guaranteed to enjoy the ‘Unalienable Rights of Life, Liberty, and the pursuit of Happiness.” King used the term “promissory note” because African Americans were left with an unfulfilled promise of enjoying their rights. “It is obvious today that America has defaulted on this promissory note insofar as her citizens of color are concerned. Instead of honoring this sacred obligation, America has given the Negro a bad check, a check which has come back marked ‘insufficient funds,’ King lamented. He went on, thundering, “But we refuse to believe that the bank of justice is bankrupt. We refuse to believe that there are insufficient funds in the great vaults of opportunity of this nation. And so, we have come to cash this check, a check that will give us upon demand the riches of freedom and the security of justice.”

King acknowledged the many challenges facing the nation but held fast to hope, saying, “And so even though we face the difficulties of today and tomorrow, I still have a dream. It is a dream deeply rooted in the American dream. I have a dream that one day this nation will rise up and live out the true meaning of its creed: ‘We hold these truths to be self-evident, that all men are created equal.’”

The master orator built to an emotional crescendo, finishing his speech with an appeal to universal freedom for all humans, pronouncing, “And when this happens, when we allow freedom to ring, when we let it ring from every village and every hamlet, from every state and every city, we will be able to speed up that day when all of God’s children, black men and white men, Jews and Gentiles, Protestants and Catholics, will be able to join hands and sing in the words of the old spiritual: ‘Free at last! Free at last! Thank God Almighty, we are free at last.’”

King’s “I Have a Dream” speech demonstrated the moral vision and oratory skills that identified him as the leader of the civil rights movement. It reflected King’s character and the best of America’s ideals regarding equal rights and justice for all. The hundreds of thousands of participants and millions of viewers on television witnessed the greatest moment of the civil rights movement when its greatest leader articulated a vision for equal rights in America for all people.