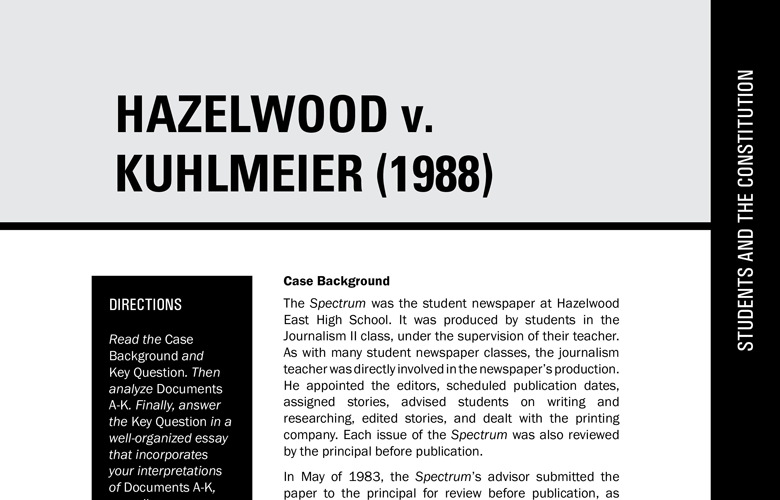 STUDENTS AND THE CONSTITUTION

Read the Case Background and Key Question. Then analyze Documents A-K. Finally, answer the Key Question in a well-organized essay that incorporates your interpretations of Documents A-K, as well  as your own knowledge of history.

The Spectrum was the student newspaper at Hazelwood East High School. It was produced by students in the Journalism II class, under the supervision of their teacher. As with many student newspaper classes, the journalism teacher was directly involved in the newspaper’s production. He appointed the editors, scheduled publication dates, assigned stories, advised students on writing and researching, edited stories, and dealt with the printing company. Each issue of the Spectrum was also reviewed by the principal before publication.

In May of 1983, the Spectrum’s advisor submitted the paper to the principal for review before publication, as usual. The principal found two stories that concerned him. One was about teen pregnancy and featured interviews with unnamed students. The other was about the impact of divorce on teens, and also featured interviews, this time with identified students. The principal was concerned that the unnamed students could be identified, and that the parents discussed in the divorce story had not been given a chance to respond. He ordered the stories deleted from the paper.

Believing the school had violated their First Amendment rights, several Spectrum staff members, including Cathy Kuhlmeier, sued. While the original court upheld the school’s actions, the Appeals Court sided with the students, holding that the Spectrum was “a public forum, because it was “intended to be and operated as a conduit for student viewpoint.” The court concluded that Spectrum’s status as a public forum prevented school officials from censoring its contents except when “necessary to avoid material and substantial interference with school work or discipline … or
the rights of others.”

Hazelwood School District appealed the case to the Supreme Court. The Court had to determine if the Spectrum was a public forum, and whether public schools could censor student speech within school-sponsored expressive activities.