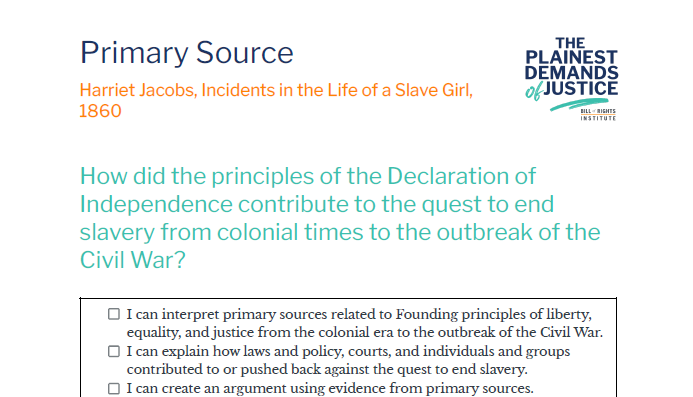 Harriet Jacobs was the first woman to write a slave narrative. Jacobs wrote her narrative as an appeal to northern women in particular, to oppose slavery because of the sexual predation that young women such as herself experienced while enslaved. Jacobs self-published her account of life as a slave and her eventual escape to freedom in 1861 under the pseudonym Linda Brent.

Incidents in the Life of a Slave Girl

The secrets of slavery are concealed like those of the Inquisition [rebellion]. My master was, to my knowledge, the father of eleven slaves. But did the mothers dare to tell who was the father of their children? Did the other slaves dare to allude to it, except in whispers among themselves? No, indeed! They knew too well the terrible consequences. . .

Nay, more, they are not only willing, but proud, to give their daughters in marriage to slaveholders. The poor girls have romantic notions of a sunny clime, and of the flowering vines that all the year round shade a happy home. To what disappointments are they destined! The young wife soon learns that the husband in whose hands she has placed her happiness pays no regard to his marriage vows. Children of every shade of complexion play with her own fair babies, and too well she knows that they are born unto him of his own household. Jealousy and hatred enter the flowery home, and it is ravaged of its loveliness.

Southern women often marry a man knowing that he is the father of many little slaves. They do not trouble themselves about it. They regard such children as property, as marketable as the pigs on the plantation; and it is seldom that they do not make them aware of this by passing them into the slave-trader’s hands as soon as possible, and thus getting them out of their sight.