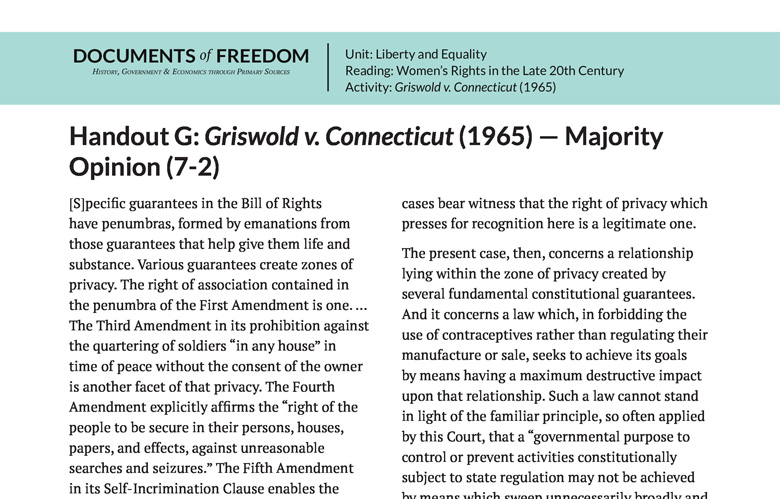 [S]pecific guarantees in the Bill of Rights have penumbras, formed by emanations from those guarantees that help give them life and substance. Various guarantees create zones of privacy. The right of association contained in the penumbra of the First Amendment is one. … The Third Amendment in its prohibition against the quartering of soldiers “in any house” in time of peace without the consent of the owner is another facet of that privacy. The Fourth Amendment explicitly affirms the “right of the people to be secure in their persons, houses, papers, and effects, against unreasonable searches and seizures.” The Fifth Amendment in its Self-Incrimination Clause enables the citizen to create a zone of privacy which government may not force him to surrender to his detriment. The Ninth Amendment provides: “The enumeration in the Constitution, of certain rights, shall not be construed to deny or disparage others retained by the people.”

The Fourth and Fifth Amendments were described … as protection against all governmental invasions “of the sanctity of a man’s home and the privacies of life.”
We have had many controversies over these penumbral rights of “privacy and repose.” These cases bear witness that the right of privacy which presses for recognition here is a legitimate one.

The present case, then, concerns a relationship lying within the zone of privacy created by several fundamental constitutional guarantees. And it concerns a law which, in forbidding the use of contraceptives rather than regulating their manufacture or sale, seeks to achieve its goals by means having a maximum destructive impact upon that relationship. Such a law cannot stand in light of the familiar principle, so often applied by this Court, that a “governmental purpose to control or prevent activities constitutionally subject to state regulation may not be achieved by means which sweep unnecessarily broadly and thereby invade the area of protected freedoms.”

Would we allow the police to search the sacred precincts of marital bedrooms for telltale signs of the use of contraceptives? The very idea is repulsive to the notions of privacy surrounding the marriage relationship. We deal with a right of privacy older than the Bill of Rights – older than our political parties, older than our school system. Marriage is a coming together for better or for worse, hopefully enduring, and intimate to the degree of being sacred…