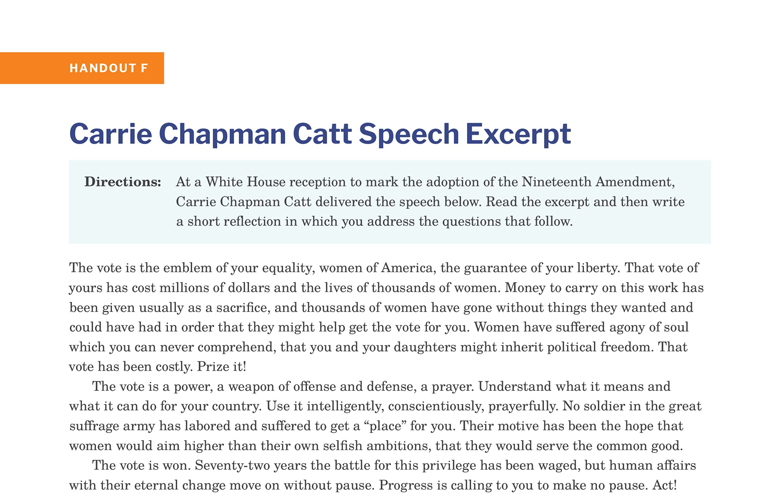 At a White House reception to mark the adoption of the Nineteenth Amendment, Carrie Chapman Catt delivered the speech below. Read the excerpt and then write a short reflection in which you address the questions that follow.

The vote is the emblem of your equality, women of America, the guarantee of your liberty. That vote of yours has cost millions of dollars and the lives of thousands of women. Money to carry on this work has been given usually as a sacrifice, and thousands of women have gone without things they wanted and could have had in order that they might help get the vote for you. Women have suffered agony of soul which you can never comprehend, that you and your daughters might inherit political freedom. That vote has been costly. Prize it!

The vote is a power, a weapon of offense and defense, a prayer. Understand what it means and what it can do for your country. Use it intelligently, conscientiously, prayerfully. No soldier in the great suffrage army has labored and suffered to get a “place” for you. Their motive has been the hope that women would aim higher than their own selfish ambitions, that they would serve the common good.

The vote is won. Seventy-two years the battle for this privilege has been waged, but human affairs with their eternal change move on without pause. Progress is calling to you to make no pause. Act!