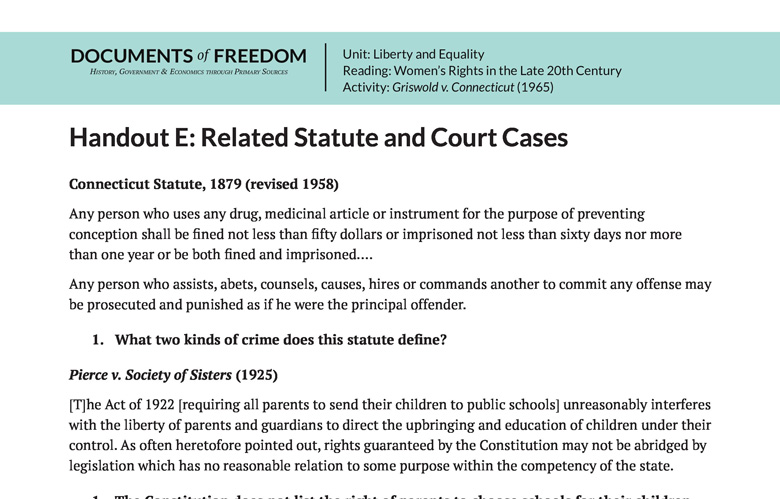 Any person who uses any drug, medicinal article or instrument for the purpose of preventing conception shall be fined not less than fifty dollars or imprisoned not less than sixty days nor more than one year or be both fined and imprisoned.…

Any person who assists, abets, counsels, causes, hires or commands another to commit any offense may be prosecuted and punished as if he were the principal offender.

[T]he Act of 1922 [requiring all parents to send their children to public schools] unreasonably interferes with the liberty of parents and guardians to direct the upbringing and education of children under their control. As often heretofore pointed out, rights guaranteed by the Constitution may not be abridged by legislation which has no reasonable relation to some purpose within the competency of the state.

[The scope of the Due Process Clause only includes rights which] have been found to be implicit in the concept of ordered liberty, and thus, through the Fourteenth Amendment, become valid as against the states … [and which are] the very essence of a scheme of ordered liberty.

[T]he full scope of the liberty guaranteed by the Due Process Clause [of the Fourteenth Amendment] cannot be found in or limited by the precise terms of the specific guarantees elsewhere provided in the Constitution. This “liberty” is not a series of isolated points pricked out in terms of the taking of property; the freedom of speech, press, and religion; the right to keep and bear arms; the freedom from unreasonable searches and seizures; and so on. It is a rational continuum which, broadly speaking, includes a freedom from all substantial arbitrary impositions and purposeless restraints.…