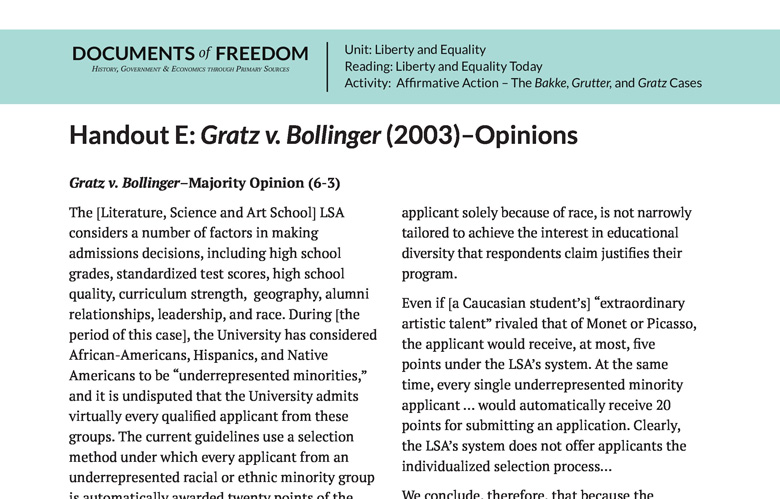 The [Literature, Science and Art School] LSA considers a number of factors in making admissions decisions, including high school grades, standardized test scores, high school quality, curriculum strength, geography, alumni relationships, leadership, and race. During [the period of this case], the University has considered African-Americans, Hispanics, and Native Americans to be “underrepresented minorities,” and it is undisputed that the University admits virtually every qualified applicant from these groups. The current guidelines use a selection method under which every applicant from an underrepresented racial or ethnic minority group is automatically awarded twenty points of the 100 needed to guarantee admission.

We find that the University’s policy, which automatically distributes 20 points, or one-fifth of the points needed to guarantee admission, to every single “underrepresented minority” applicant solely because of race, is not narrowly tailored to achieve the interest in educational diversity that respondents claim justifies their program.

Even if [a Caucasian student’s] “extraordinary artistic talent” rivaled that of Monet or Picasso, the applicant would receive, at most, five points under the LSA’s system. At the same time, every single underrepresented minority applicant … would automatically receive 20 points for submitting an application. Clearly, the LSA’s system does not offer applicants the individualized selection process…

We conclude, therefore, that because the University’s use of race in its current freshman admissions policy is not narrowly tailored to achieve respondents’ asserted compelling interest in diversity, the admissions policy violates the Equal Protection Clause of the Fourteenth Amendment.

The very nature of a college’s permissible practice of awarding value to racial diversity means that race must be considered in a way that increases some applicants’ chances for admission. [I]t is hard to see what is inappropriate in assigning some stated value to a relevant characteristic, whether it be reasoning ability, writing style, running speed, or minority race…

It suffices for me … that there are no … set-asides and that consideration of an applicant’s whole spectrum of ability is no more ruled out by giving 20 points for race than by giving the same points for athletic ability or socioeconomic disadvantage.