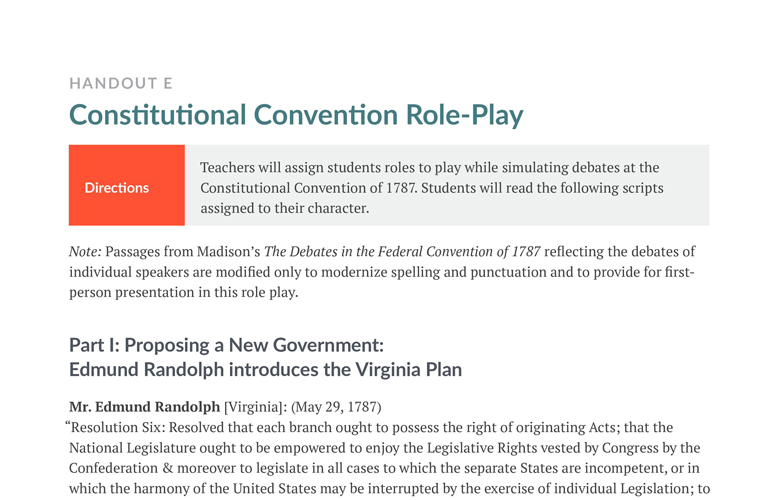 Teachers will assign students roles to play while simulating debates at the Constitutional Convention of 1787. Students will read the following scripts assigned to their character.

Note: Passages from Madison’s The Debates in the Federal Convention of 1787 reflecting the debates of individual speakers are modified only to modernize spelling and punctuation and to provide for first person presentation in this role play.

“Resolution Six: Resolved that each branch ought to possess the right of originating Acts; that the National Legislature ought to be empowered to enjoy the Legislative Rights vested by Congress by the Confederation & moreover to legislate in all cases to which the separate States are incompetent, or in which the harmony of the United States may be interrupted by the exercise of individual Legislation; to negative all laws passed by the several States, contravening in the opinion of the National Legislature the articles of Union; and to call forth the force of the Union against any member of the Union failing to fulfill its duty under the Articles thereof.”

Part II: Federalism: Congressional Powers and the States (May 31, 1787)

“On the resolution stating the cases in which the national Legislature ought to legislate was next taken into discussion: On the question whether each branch should originate laws, there was an unanimous affirmation without debate. On the question for transferring all the Legislative powers of the existing Congress to this Assembly, there was also a silent affirmation. On the proposition for giving ‘Legislative power in all cases to which the State Legislatures were individually competent.’”

“I object to the vagueness of the term incompetent, and I could not well decide how to vote until I should see an exact enumeration of the powers comprehended by the definition.”

“I repeat my fears that we are running into an extreme in taking away the powers of the States, and called on Mr. Randolph for the extent of his meaning.”

“I disclaim any intention to give indefinite powers to the national Legislature, and declare that I am entirely opposed to such an inroad on the State jurisdictions, and that I did not think any considerations whatever could ever change my determination. My opinion is fixed on the point.”

“I had brought with me into the Convention a strong bias in favor of an enumeration and definition of the powers necessary to be exercised by the national Legislature; but had also brought doubts concerning its practicability. My wishes remained unaltered. But I should shrink from nothing which should be found essential to such a form of government as would provide for the safety, liberty, and happiness of the community. This being the end of all our deliberations, all the necessary means for attaining it must, however, be reluctantly submitted to.”

“On the question for giving powers, in cases to which the States are not competent . . . nine states vote aye, and Connecticut is divided.”

“I lay before the Convention the plan which several of the delegations wish to be substituted in place of that proposed by Mr. Randolph [the Virginia Plan].

“Resolved that the articles of Confederation ought to be so revised, corrected & enlarged, as to render the federal Constitution adequate to the exigencies of Government, & the preservation of the Union.

“Resolved that in addition to the powers vested in the United States in Congress, by the present existing articles of Confederation, they be authorized to pass acts for raising a revenue, by levying a duty or duties on all goods or merchandizes of foreign growth or manufacture, imported into any part of the U[nited] States. Also, to pass Acts for the regulation of trade & commerce as well with foreign nations as with each other.”

Part IV: Gouverneur Morris on the Need for More Congressional Power at the National Level

“It [a system such as that of the Confederation] is no Government at all. It is altogether dependent on the States, and will act over again the part which Congress has acted. A firm Government alone can protect our liberties.

“Returning to the Report I cannot think it in any respect calculated for the public good. As the 2nd branch is now constituted, there will be constant disputes & appeals to the States which will undermine the General Government & control & annihilate the 1st branch. State attachments, and State importance have been the bane of this Country. We can not annihilate; but we may perhaps take out the teeth of the serpents. I wish our ideas to be enlarged to the true interest of man, instead of being circumscribed within the narrow compass of a particular Spot.”

Part V: Debate on the Need for Checks and Balances over the Legislature by the Judiciary and Executive

“The Judiciary ought to have an opportunity of remonstrating against projected encroachments on the people as well as on themselves. Laws may be unjust, may be unwise, may be dangerous, may be destructive; and yet may not be so unconstitutional as to justify the Judges in refusing to give them effect. Let them have a share in the Revisionary power, and they will have an opportunity of taking notice of the character of a law, and of counteracting, by the weight of their opinions the improper views of the Legislature.”

“It is much more to be apprehended that notwithstanding this co-operation of the two departments, the Legislature would still be an overmatch for them. Experience in all the States had evinced a powerful tendency in the Legislature to absorb all power into its vortex. This was the real source of danger to the American Constitutions; [I think it necessary to give] every defensive authority to the other departments that was consistent with republican principles.”

“The Executive [who] will best know and be ready to defend his rights ought alone to have the defense of them. The motion is liable to strong objections. It is establishing an improper coalition between the Executive and Judiciary departments. It is making Statesmen of the Judges; and setting them up as the guardians of the Rights of the people. I rely for my part on the Representatives of the people as the guardians of their Rights & interests.”

“I wish the further use to be made of the Judges, of giving aid in preventing every improper law. Their aid will be the more valuable as they are in the habit and practice of considering laws in their true principles, and in all their consequences.”

Part VI: Congressional Powers and the Separation of Powers

“I oppose vesting this power in the Legislature. Its proceedings are too slow. It would meet but once a year. The House of Representatives would be too numerous for such deliberations.”

“I am for vesting the power in the President, who will have all the requisite qualities, and will not make war but when the Nation will support it.”

“I move to insert ‘declare,’ striking out ‘make’ war; leaving to the Executive the power to repel sudden attacks.”

“I concur. The Executive should be able to repel and not to commence war.”

“I am shocked! I never expected to hear in a republic a motion to empower the Executive alone to declare war.”

“I am against giving the power of war to the Executive, because [he is] not safely to be trusted with it. I am for clogging rather than facilitating war; but for facilitating peace. I prefer ‘declare’ to ‘make.’”

“On the motion to insert declare – in place of make, it is agreed to. Seven states to two with Massachusetts absent.”