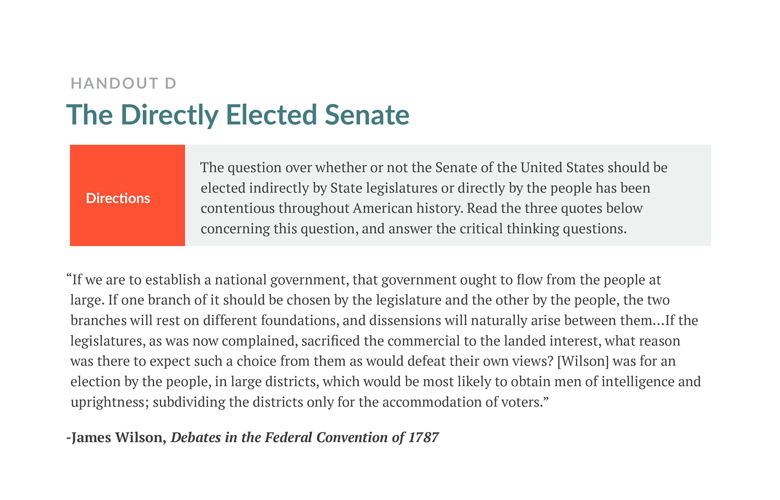 Directions: The question over whether or not the Senate of the United States should be elected indirectly by State legislatures or directly by the people has been contentious throughout American history. Read the three quotes below concerning this question, and answer the critical thinking questions.

“If we are to establish a national government, that government ought to flow from the people at large. If one branch of it should be chosen by the legislature and the other by the people, the two branches will rest on different foundations, and dissensions will naturally arise between them…If the legislatures, as was now complained, sacrificed the commercial to the landed interest, what reason was there to expect such a choice from them as would defeat their own views? [Wilson] was for an election by the people, in large districts, which would be most likely to obtain men of intelligence and uprightness; subdividing the districts only for the accommodation of voters.”

-James Wilson, Debates in the Federal Convention of 1787

“Take it altogether, the choice which the people have as a rule in the election of United States senators under our present system is involved in so many uncertainties, and surrounded by so many restrictions, that virtually they have no choice at all in relation to it. The present system is un- republican, undemocratic, and vicious in all respects. Not the least offensive of these restrictions imposed by our present system is that which deprives the individual voter of the right to cast his vote directly, and without circumlocution through vicarious instrumentalities, for a United States senator.”

“Rhode Island is the smallest of our states in area and thirty-fourth in population—twelve hundred and fifty square miles, less than half a million people, barely seventy thousand voters with the rolls padded by the Aldrich machine. But size and numbers are nothing; it contains as many sturdy Americans proportionately as any other state. Its bad distinction of supplying the enemy with a bold leader is due to its ancient and aristocratic constitution, changed once, away back before the middle of the last century, but still an archaic document for class rule. The apportionment of legislators is such that one-eleventh of the population, and they the most ignorant and most venal, elect a majority of the legislature—which means that they elect the two United States senators. Each city and township counts as a political unit; thus, the five cities that together have two-thirds of the population are in an overwhelming minority before twenty almost vacant rural townships—their total population is not thirty-seven thousand—where the ignorance is even illiterate, where the superstition is mediaeval, where tradition and custom have made the vote an article of legitimate merchandising.”

-David Graham Phillips, “The Treason of the Senate”, 1906