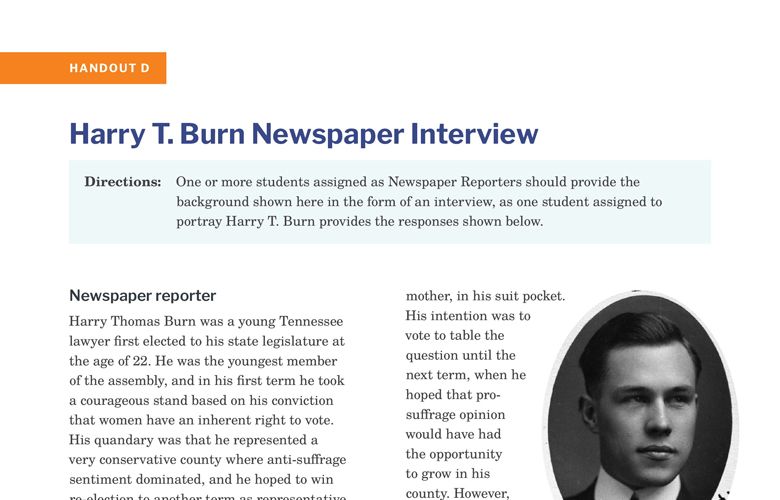 One or more students assigned as Newspaper Reporters should provide the background shown here in the form of an interview, as one student assigned to portray Harry T. Burn provides the responses shown below.

Harry Thomas Burn was a young Tennessee lawyer first elected to his state legislature at the age of 22. He was the youngest member of the assembly, and in his first term he took a courageous stand based on his conviction that women have an inherent right to vote. His quandary was that he represented a very conservative county where anti-suffrage sentiment dominated, and he hoped to win re-election to another term as representative. Was it his duty to reflect the preference of his constituents and increase his chances of winning the next election, or was it his duty to vote his own conscience regarding the right of women to participate in their governance?

By August of 1920, thirty-five of the fortyeight state legislatures had voted to ratify the Nineteenth Amendment guaranteeing women’s right to vote on the same terms as men in all elections in the United States. But the Constitution requires ratification by threefourths of the states, or 36, and Tennessee was the only state that had agreed to hold a special session to decide the question that summer. The Tennessee debate came to be called the “War of the Roses.” Pro-suffrage legislators wore yellow roses in their lapels, and anti-suffrage legislators wore red roses. Knowing the will of his constituents, Burn wore a red rose – but he had hidden a yellow rose, and a recent letter from his mother, in his suit pocket. His intention was to vote to table the question until the next term, when he hoped that prosuffrage opinion would have had the opportunity to grow in his county. However, the vote to delay the question was tied at 48 – 48—twice. Finally, the speaker of the house called for a vote on the Amendment itself, rather than a vote to delay. The letter from his widowed mother, Febb E. Burn, gained new significance. She had written:

“Dear Son, … Hurray and vote for Suffrage and don’t keep them in doubt. I noticed Chandlers’ speech, it was very bitter. I’ve been waiting to see how you stood but have not seen anything yet…. Don’t forget to be a god boy and help Mrs. Catt with her “Rats.” Is she the one that put rat in ratification, Ha! No more from mama this time. With lots of love, Mama.”

Harry changed his vote to “Aye.” Tennessee became the thirty-sixth state to ratify, making the Nineteenth Amendment the law of the land. Burn faced threats to his life and false charges that he had accepted a bribe to change his vote. His mother was pressured to renounce the letter and say it was a fraud. However, both stood firm and the right of women to vote was secured 72 years after the Seneca Falls Convention had demanded it.

Courageously facing the threats and intimidation leveled against him, Burn explained that his decision was based on “morality, justice, his mother, and the glory of the Republican party.”

Representative Burn, explain for our newspaper readers what you were thinking during these important events. 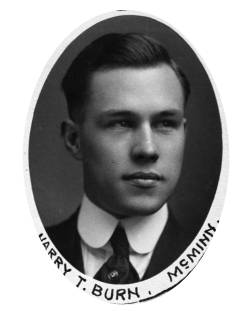 I desire to resent in the name of honesty and justice the veiled intimidation and accusation regarding my vote on the Suffrage Amendment as indicated in certain statements, and it is my sincere belief that those responsible for their existence know that there is not a scintilla of truth in them. I want to state that I changed my vote in favor of ratification first because I believe in full suffrage as a right; second, I believe we had a moral and legal right to ratify; third, I knew that a mother’s advice is always safest for a boy to follow and my mother wanted me to vote for ratification; fourth, I appreciated the fact that an opportunity such as seldom comes to a mortal man to free seventeen million women from political slavery was mine; fifth, I desired that my party in both State and nation might say that it was a republican from the East mountains of Tennessee, the purest Anglo-Saxon section in the world, who made national woman suffrage possible at this date, not for personal glory but for the glory of his party.”

“I had always believed that women had an inherent right to vote. It was a logical attitude from my standpoint. My mother was a college woman, a student of national and international affairs who took an interest in all public issues. She could not vote. Yet the tenant farmers on our farm, some of whom were illiterate, could vote. On that roll call, confronted with the fact that I was going to go on record for time and eternity on the merits of the question, I had to vote for ratification.”

Used by permission, www.TeachTNHistory.org, an education program of East Tennessee Historical Society, Knoxville. The primary source itself, the journal excerpt, is found in the holdings of the Tennessee Library and Archives in Nashville. See Harry_T._Burn.pdf and also the-man-and-his-mom-who-gave-women-the-votereport.