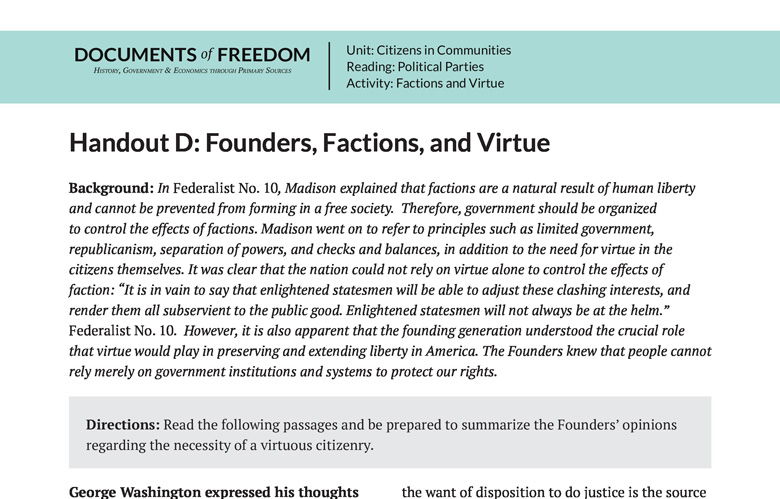 Background: In Federalist No. 10, Madison explained that factions are a natural result of human liberty and cannot be prevented from forming in a free society. Therefore, government should be organized to control the effects of factions. Madison went on to refer to principles such as limited government, republicanism, separation of powers, and checks and balances, in addition to the need for virtue in the citizens themselves. It was clear that the nation could not rely on virtue alone to control the effects of faction: “It is in vain to say that enlightened statesmen will be able to adjust these clashing interests, and render them all subservient to the public good. Enlightened statesmen will not always be at the helm.” Federalist No. 10. However, it is also apparent that the founding generation understood the crucial role that virtue would play in preserving and extending liberty in America. The Founders knew that people cannot rely merely on government institutions and systems to protect our rights.

Directions: Read the following passages and be prepared to summarize the Founders’ opinions regarding the necessity of a virtuous citizenry.

George Washington expressed his thoughts on civic virtue and self-government in a letter to John Jay (1786): “I think there is more wickedness than ignorance, mixed with our councils. … Yet, something must be done, or the fabric must fall. It certainly is tottering! Ignorance & design, are difficult to combat. Out of these proceed illiberality, improper jealousies, and a train of evils which oftentimes, in republican governments, must be sorely felt before they can be removed. The former, that is ignorance, being a fit soil for the latter to work in, tools are employed which a generous mind would disdain to use; and which nothing but time, and their own puerile or wicked productions, can show the inefficacy and dangerous tendency of. I think often of our situation, and view it with concern. From the high ground on which we stood—from the plain path which invited our footsteps, to be so fallen!—so lost! is really mortifying. But virtue, I fear, has, in a great degree, taken its departure from our Land, and the want of disposition to do justice is the source of the national embarrassments; for under whatever guise or colorings are given to them, this, I apprehend, is the origin of the evils we now feel, & probably shall labor for sometime yet.”

Federalist No. 55 (1788): “As there is a degree of depravity in mankind which requires a certain degree of circumspection and distrust: So there are other qualities in human nature which justify a certain portion of esteem and confidence. Republican government presupposes the existence of these qualities in a higher degree than any other form…Were the pictures which have been drawn by the political jealousy of some among us, faithful likenesses of the human character the inference would be that there is not sufficient virtue among men for self-government; and that nothing less than the chains of despotism can restrain them from destroying and devouring one another…”

Federalist No. 57 (1788): “The aim of every political Constitution is or ought to be first to obtain for rulers, men who possess most wisdom to discern, and most virtue to pursue the common good of the society, and in the next place, to take the most effectual precautions for keeping them virtuous, whilst they continue to hold their public trust.”

Federalist No. 71 (1788): “The republican principle demands that the deliberate sense of the community should govern the conduct of those to whom they entrust the management of their affairs; but it does not require an unqualified complaisance to every sudden breeze of passion, or to every transient impulse which the people may receive from the arts of men, who flatter their prejudices to betray their interests.”

In his Farewell Address, Washington reiterated (1796): “…virtue or morality is a necessary spring of popular government… indissoluble union between virtue and happiness… [there are] solid rewards of public prosperity and felicity.”