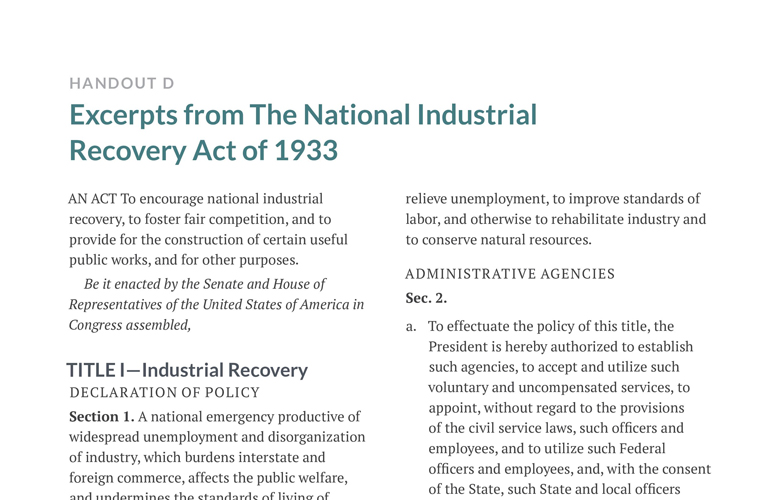 AN ACT To encourage national industrial recovery, to foster fair competition, and to provide for the construction of certain useful public works, and for other purposes.
Be it enacted by the Senate and House of Representatives of the United States of America in Congress assembled,

Section 1. A national emergency productive of widespread unemployment and disorganization of industry, which burdens interstate and foreign commerce, affects the public welfare, and undermines the standards of living of the American people, is hereby declared to exist. It is hereby declared to be the policy of Congress to remove obstructions to the free flow of interstate and foreign commerce which tend to diminish the amount thereof; and to provide for the general welfare by promoting the organization of industry for the purpose of cooperative action among trade groups, to induce and maintain united action of labor and management under adequate governmental sanctions and supervision, to eliminate unfair competitive practices, to promote the fullest possible utilization of the present protective capacity of industries, to avoid undue restriction of production (except as may be temporarily required), to increase the consumption of industrial and agricultural products by increasing purchasing power, to reduce and relieve unemployment, to improve standards of labor, and otherwise to rehabilitate industry and to conserve natural resources.

Full text can be found at: http://www.ourdocuments.gov/doc.php?doc=66