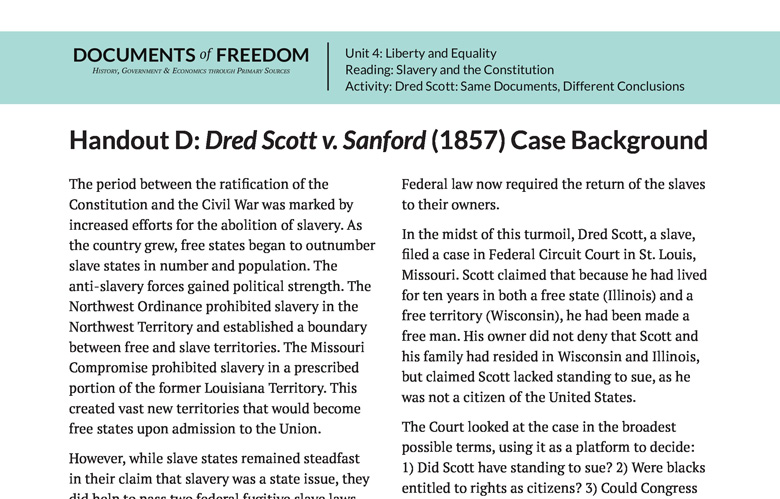 The period between the ratification of the Constitution and the Civil War was marked by increased efforts for the abolition of slavery. As the country grew, free states began to outnumber slave states in number and population. The anti-slavery forces gained political strength. The Northwest Ordinance prohibited slavery in the Northwest Territory and established a boundary between free and slave territories. The Missouri Compromise prohibited slavery in a prescribed portion of the former Louisiana Territory. This created vast new territories that would become free states upon admission to the Union.

However, while slave states remained steadfast in their claim that slavery was a state issue, they did help to pass two federal fugitive slave laws, gaining national recognition of their legal rights against abolitionists who helped slaves escape.

Federal law now required the return of the slaves to their owners.

In the midst of this turmoil, Dred Scott, a slave, filed a case in Federal Circuit Court in St. Louis, Missouri. Scott claimed that because he had lived for ten years in both a free state (Illinois) and a free territory (Wisconsin), he had been made a free man. His owner did not deny that Scott and his family had resided in Wisconsin and Illinois, but claimed Scott lacked standing to sue, as he was not a citizen of the United States.

The Court looked at the case in the broadest possible terms, using it as a platform to decide:
1) Did Scott have standing to sue? 2) Were blacks entitled to rights as citizens? 3) Could Congress restrict the rights of states to decide if they would be slave or free?