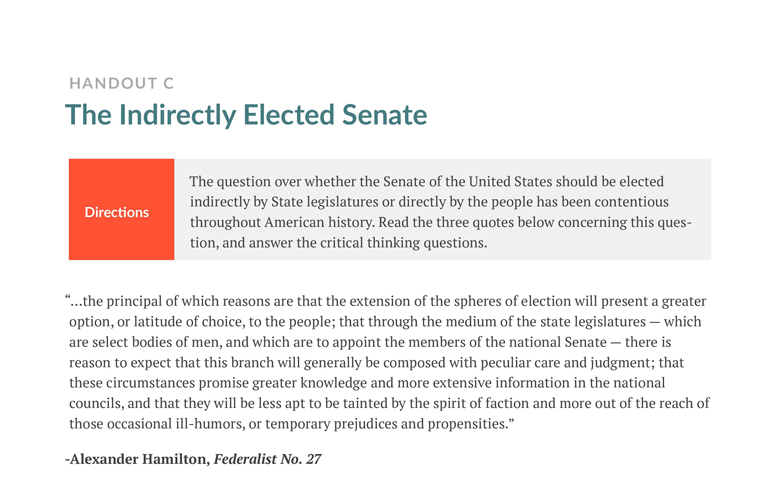 Directions: The question over whether the Senate of the United States should be elected indirectly by State legislatures or directly by the people has been contentious throughout American history. Read the three quotes below concerning this question, and answer the critical thinking questions.

“…the principal of which reasons are that the extension of the spheres of election will present a greater option, or latitude of choice, to the people; that through the medium of the state legislatures — which are select bodies of men, and which are to appoint the members of the national Senate — there is reason to expect that this branch will generally be composed with peculiar care and judgment; that these circumstances promise greater knowledge and more extensive information in the national councils, and that they will be less apt to be tainted by the spirit of faction and more out of the reach of those occasional ill-humors, or temporary prejudices and propensities.”

“The whole world knew well that the tendency of democratic government was toward frequent change; that the weakness of democratic government was its liability to change with the impulse and enthusiasm of the moment. And since the time when our fathers framed the Constitution half a score of nations, seeking to follow the lines of our experiment, have, in varying degree, and some of them to the last degree of failure, justified such an apprehension. But with us there has been one great anchor, our Constitution. The American democracy bound itself to the rules of right, which are essential to the protection of liberty, and justice, and property, and order, and made it practically impossible that the impulse, the prejudice, the excitement, the frenzy of the moment shall carry it into those excesses which have wrecked our historical prototypes.”

-Elihu Root, “Tampering with the Constitution” 1911

“Although the Senate has made itself eminent and respected, and has maintained an intellectual supremacy over the other coordinate branch of the legislative department; although it has fulfilled the ardent hopes and verified the profound wisdom of its creators by its ability to check what has been termed the “democratic recklessness” of the House on the one hand, and the tendency to executive usurpation on the other; has performed all its functions with marked ability, patriotism and efficiency; and has drawn into its ranks the most distinguished men who have entered public life, yet in recent years a powerful movement has been growing to destroy the very feature which, in the judgment of all former students and critics, has been the chief cause of its excellence — the indirect election of its members.

“Have the lurid headlines of yellow journalism as to the treason of the Senate — the irresponsible utterances of those whose sorry role is to pander to the morbid appetite for the sensational — so affected the public mind that the American people are ready to welcome any change, however radical?”

-Emmet O’Neal, “Election of United States Senators by the People”, 1908