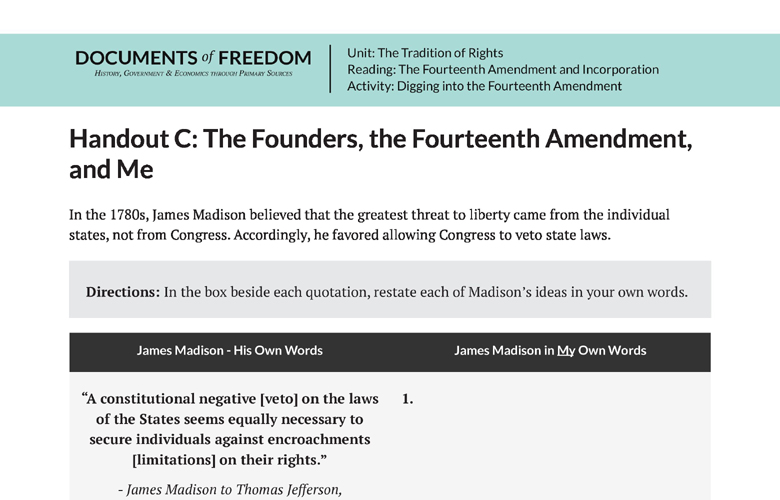 Handout C: The Founders, the Fourteenth Amendment, and Me

In the 1780s, James Madison believed that the greatest threat to liberty came from the individual states, not from Congress. Accordingly, he favored allowing Congress to veto state laws.

Directions: In the box beside each quotation, restate each of Madison’s ideas in your own words.

“A constitutional negative [veto] on the laws of the States seems equally necessary to secure individuals against encroachments [limitations] on their rights.”

“No state shall violate the equal rights of conscience…”

3. Reread closely Madison’s proposal for protecting individual liberties in the quotations above. How does his language differ from the language used in the final version of the First Amendment (below)?

Congress shall make no law respecting the establishment of religion, or the free exercise thereof…

Directions: Restate each of the excerpts from the Fourteenth Amendment in your own words.

[No State] shall deprive any person of life, liberty, or property, without due process of law.

[No State shall] deny to any person within its jurisdiction the equal protection of the laws.

7. As a result of incorporation, individuals who are unhappy with how states protect their liberties can bring suit in federal courts. Does it matter whether the state governments or the federal government has the power to protect our rights? Explain, and be prepared to discuss and defend your response in class.