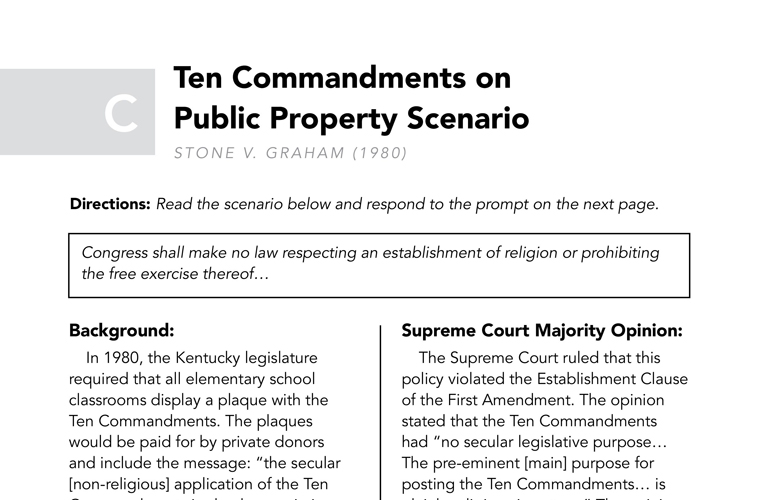 Directions: Read the scenario below and respond to the prompt on the next page.

In 1980, the Kentucky legislature required that all elementary school classrooms display a plaque with the Ten Commandments. The plaques would be paid for by private donors and include the message: “the secular [non-religious] application of the Ten Commandments is clearly seen in its adoption as the fundamental [basic] legal code of Western Civilization and the Common Law of the United States.” Sydell Stone and a group of parents challenged the law, arguing that making schools show the Ten Commandments in public school classrooms violated the Establishment Clause of the First Amendment.

Did the Kentucky Law violate the First Amendment’s Establishment Clause?

The dissenting opinion by Justice Rehnquist said that states should be able to decide what they considered secular (non-religious). Rehnquist argued that if the state legislature and the state courts both found the Ten Commandments plaque to be secular then it should be respected by higher courts. Rehnquist stated that the Ten Commandments have had a large role in the development of current laws in the Western world, and, therefore, posting them in a public building did not violate the Establishment Clause.

Write a response to this case by answering the following question:

After reading about the majority and dissenting opinions, do you believe that the Establishment Clause was violated in this case? Why or why not?