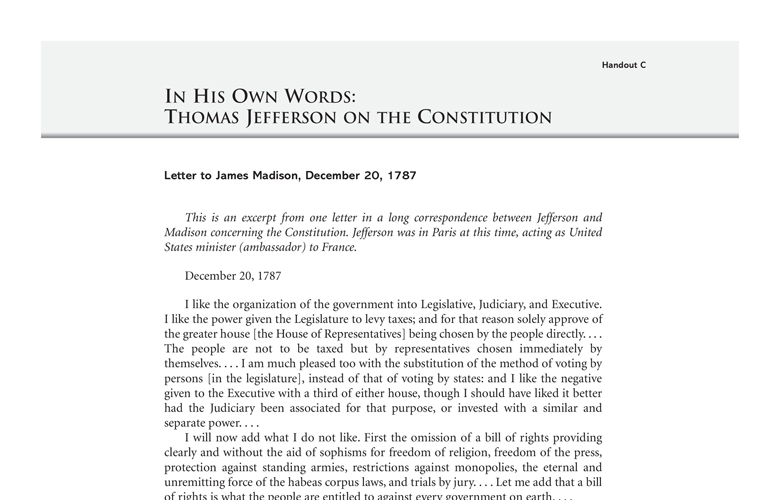 IN HIS OWN WORDS: THOMAS JEFFERSON ON THE CONSTITUTION

This is an excerpt from one letter in a long correspondence between Jefferson and Madison concerning the Constitution. Jefferson was in Paris at this time, acting as United States minister (ambassador) to France.

I like the organization of the government into Legislative, Judiciary, and Executive. I like the power given the Legislature to levy taxes; and for that reason solely approve of the greater house [the House of Representatives] being chosen by the people directly. . . . The people are not to be taxed but by representatives chosen immediately by themselves. . . . I am much pleased too with the substitution of the method of voting by persons [in the legislature], instead of that of voting by states: and I like the negative given to the Executive with a third of either house, though I should have liked it better had the Judiciary been associated for that purpose, or invested with a similar and separate power. . . .

I will now add what I do not like. First the omission of a bill of rights providing clearly and without the aid of sophisms for freedom of religion, freedom of the press, protection against standing armies, restrictions against monopolies, the eternal and unremitting force of the habeas corpus laws, and trials by jury. . . . Let me add that a bill of rights is what the people are entitled to against every government on earth….

The second feature I dislike, and greatly dislike, is the abandonment in every instance of the necessity of rotation in office, and most particularly in the case of the President. Experience concurs with reason in concluding that the first magistrate will always be re-elected if the constitution permits it. He is then an officer for life. . . . The power of removing him from office every fourth year is a power which will not be exercised….

I have thus told you freely what I like and dislike. . . . I own that I am not a friend to a very energetic government. It is always oppressive.