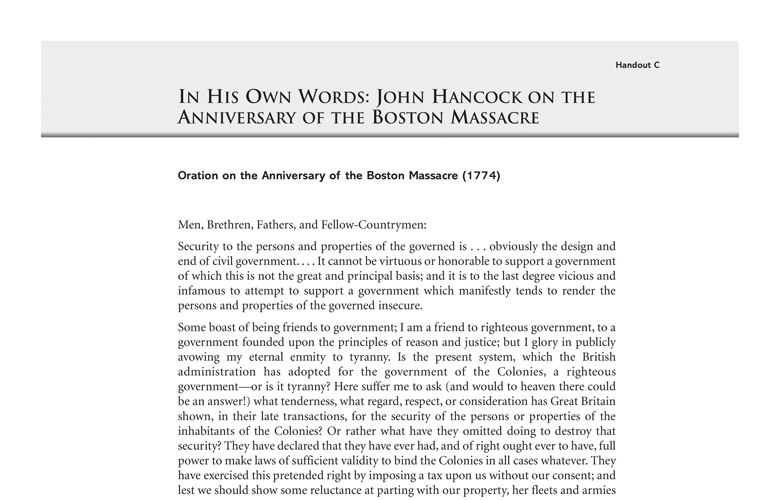 IN HIS OWN WORDS: JOHN HANCOCK ON THE ANNIVERSARY OF THE BOSTON MASSACRE

Oration on the Anniversary of the Boston Massacre (1774)

Men, Brethren, Fathers, and Fellow-Countrymen: Security to the persons and properties of the governed is . . . obviously the design and end of civil government. . . . It cannot be virtuous or honorable to support a government of which this is not the great and principal basis; and it is to the last degree vicious and infamous to attempt to support a government which manifestly tends to render the persons and properties of the governed insecure.

Some boast of being friends to government; I am a friend to righteous government, to a government founded upon the principles of reason and justice; but I glory in publicly avowing my eternal enmity to tyranny. Is the present system, which the British administration has adopted for the government of the Colonies, a righteous government—or is it tyranny? Here suffer me to ask (and would to heaven there could be an answer!) what tenderness, what regard, respect, or consideration has Great Britain shown, in their late transactions, for the security of the persons or properties of the inhabitants of the Colonies? Or rather what have they omitted doing to destroy that security? They have declared that they have ever had, and of right ought ever to have, full power to make laws of sufficient validity to bind the Colonies in all cases whatever. They have exercised this pretended right by imposing a tax upon us without our consent; and lest we should show some reluctance at parting with our property, her fleets and armies are sent to enforce their mad pretensions….

Standing armies are sometimes (I would by no means say generally, much less universally) composed of persons who have rendered themselves unfit to live in civil society; who have no other motives of conduct than those which desire of the present gratification of their passions . . . who have given up their own liberty, and envy those who enjoy liberty. . . .

A well-disciplined militia is a safe, an honorable guard to a community like this, whose inhabitants are by nature brave, and are laudably tenacious of that freedom in which they were born. From a well-regulated militia we have nothing to fear; their interest is the same with that of the State. When a country is invaded, the militia are ready to appear in its defense; they march into the field with that fortitude which a consciousness of the justice of their cause inspires. . . . No; they fight for their houses, their lands, for their wives, their children; for all who claim the tenderest names, and are held dearest in their hearts….

Suffer not yourselves to be betrayed, by the soft arts of luxury and effeminacy, into the pit digged for your destruction. Despise the glare of wealth. That people who pay greater respect to a wealthy villain than to an honest, upright man in poverty, almost deserve to be enslaved; they plainly show that wealth, however it may be acquired, is, in their esteem, to be preferred to virtue. . . .

I have the most animating confidence that the present noble struggle for liberty will terminate gloriously for America.