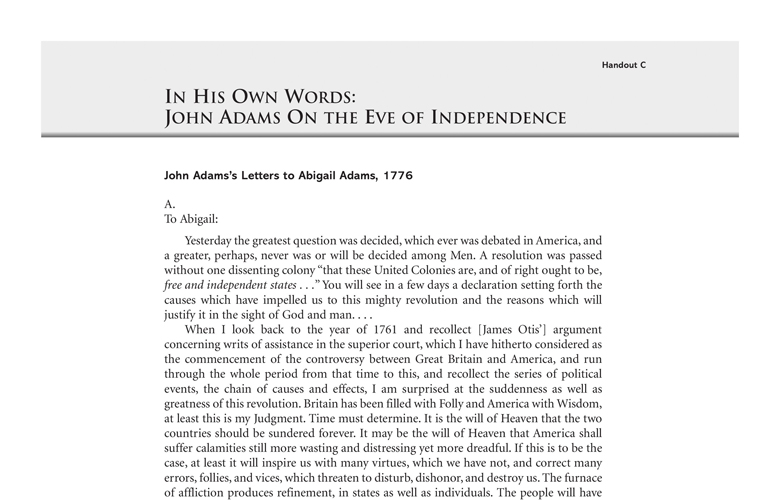 IN HIS OWN WORDS: JOHN ADAMS ON THE EVE OF INDEPENDENCE

Yesterday the greatest question was decided, which ever was debated in America, and a greater, perhaps, never was or will be decided among Men. A resolution was passed without one dissenting colony “that these United Colonies are, and of right ought to be, free and independent states . . .” You will see in a few days a declaration setting forth the causes which have impelled us to this mighty revolution and the reasons which will justify it in the sight of God and man….

When I look back to the year of 1761 and recollect [James Otis’] argument concerning writs of assistance in the superior court, which I have hitherto considered as the commencement of the controversy between Great Britain and America, and run through the whole period from that time to this, and recollect the series of political events, the chain of causes and effects, I am surprised at the suddenness as well as greatness of this revolution. Britain has been filled with Folly and America with Wisdom, at least this is my Judgment. Time must determine. It is the will of Heaven that the two countries should be sundered forever. It may be the will of Heaven that America shall suffer calamities still more wasting and distressing yet more dreadful. If this is to be the case, at least it will inspire us with many virtues, which we have not, and correct many errors, follies, and vices, which threaten to disturb, dishonor, and destroy us. The furnace of affliction produces refinement, in states as well as individuals. The people will have unbounded power. And the people are extremely addicted to corruption and venality, as well as the great. I am not without apprehensions from this quarter, but I must submit all my hopes and fears to an overruling Providence, in which, unfashionable as the faith may be, I firmly believe.

. . . The second day of July, 1776, will be a memorable epoch in the history of America. I am apt to believe that it will be celebrated by succeeding generations, as the great Anniversary Festival. It ought to be commemorated, as the day of deliverance by solemn acts of devotion to God Almighty. It ought to be solemnized with …games, sports, guns, bells, bonfires and illuminations, from one end of the continent to the other, from this time forward forever.

You will think me transported with enthusiasm; but I am not. I am well aware of the toil, and blood, and treasure, that it will cost us to maintain this declaration, and support and defend these states. Yet, through all the gloom, I can see the rays of light and glory; I can see that the end is more than worth all the means, and that posterity will triumph, although you and I may rue, which I hope we shall not.