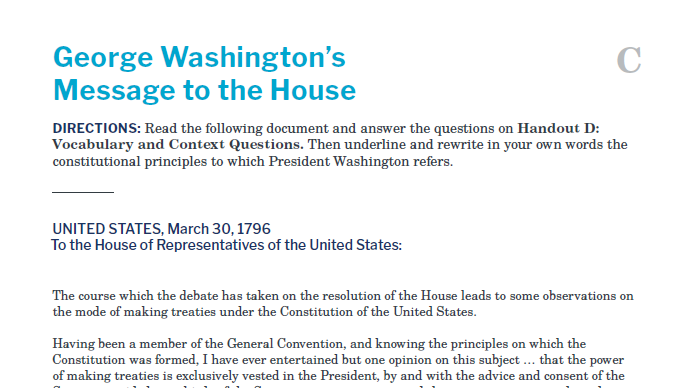 George Washington’s Message to the House

Directions: Read the following document and answer the questions on Handout D: Vocabulary and Context Questions. Then underline and rewrite in your own words the constitutional principles to which President Washington refers.

UNITED STATES, March 30, 1796
To the House of Representatives of the United States:

The course which the debate has taken on the resolution of the House leads to some observations on the mode of making treaties under the Constitution of the United States.

Having been a member of the General Convention, and knowing the principles on which the Constitution was formed, I have ever entertained but one opinion on this subject … that the power of making treaties is exclusively vested in the President, by and with the advice and consent of the Senate, provided two-thirds of the Senators present concur; and that every treaty so made and promulgated thenceforward became the law of the land.

It is thus that the treaty-making power has been understood by foreign nations, and in all the treaties made with them we have declared and they have believed that, when ratified by the President, with the advice and consent of the Senate, they became obligatory….

As, therefore, it is perfectly clear to my understanding that the assent of the House of Representatives is not necessary to the validity of a treaty … and as it is essential to the due administration of the Government that the boundaries fixed by the Constitution between the different departments should be preserved, a just regard to the Constitution and to the duty of my office, under all the circumstances of this case, forbids a compliance with your request.