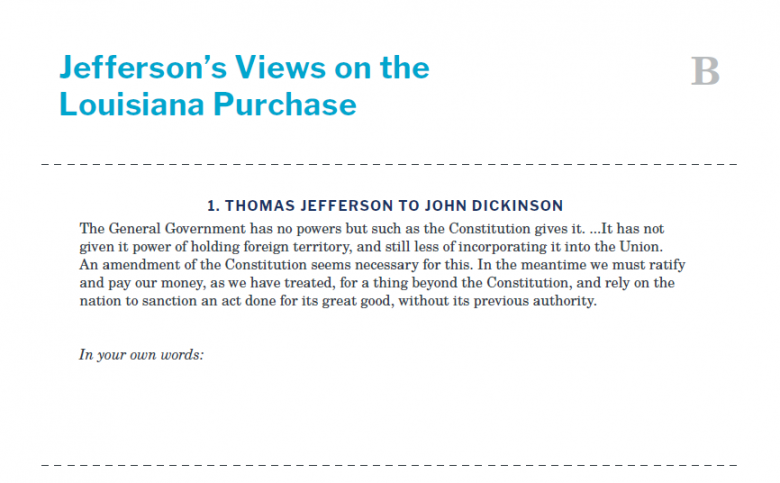 Jefferson’s Views on the Louisiana Purchase

The General Government has no powers but such as the Constitution gives it. …It has not given it power of holding foreign territory, and still less of incorporating it into the Union. An amendment of the Constitution seems necessary for this. In the meantime we must ratify and pay our money, as we have treated, for a thing beyond the Constitution, and rely on the nation to sanction an act done for its great good, without its previous authority.

This treaty must of course be laid before both Houses, because both have important functions to exercise respecting it. They, I presume, will see their duty to their country in ratifying & paying for it… But I suppose they must then appeal to the nation for an additional article to the Constitution, approving and confirming an act which the nation had not previously authorized. …The Legislature … must … throw themselves on their country for doing for them unauthorized what we know they would have done for themselves had they been in a situation to do it. It is the case of a guardian investing the money of his ward in purchasing an important adjacent territory; and saying to him when of age, “I did this for your good.”

I am aware of the force of the observations you make on the power given by the Constitution to Congress to admit new states into the Union, without restraining the subject to the territory then constituting the US. But when I consider that the limits of the US are precisely fixed … [and] that the Constitution expressly declares itself to be made for the US, I cannot help believing the intention was to permit Congress to admit into the Union new states which should be formed out of the territory for which, and under whose authority alone, they were then acting. I do not believe it was meant that they might receive England, Ireland, Holland, etc. into it, which would be the case on your construction.

When an instrument admits two constructions, the one safe, the other dangerous, the one precise, the other indefinite, I prefer that which is safe and precise. I had rather ask an enlargement of power from the nation, where it is found necessary, than to assume it by a construction which would make our powers boundless. Our peculiar security is in possession of a written Constitution. Let us not make it a blank paper by construction.

I confess, then, I think it important in the present case to set an example against broad construction by appealing for new power to the people. If, however, our friends shall think differently, certainly I shall acquiesce with satisfaction, confiding that the good sense of our country will correct the evil of construction when it shall produce ill effects.

The property and sovereignty of all Louisiana… have on certain conditions been transferred to the United States by instruments bearing date the 30th of April last. When these shall have received the constitutional sanction of the Senate, they will without delay be communicated to the Representatives also, for the exercise of their functions, as to those conditions which are within the powers vested by the Constitution in Congress. The property and sovereignty of the Mississippi and its waters secure an independent outlet for the produce of the western States…, the fertility of the country, … promise in due season important aids to our treasury, an ample provision for our posterity, and a wide-spread field for the blessings of freedom and equal laws. With the wisdom of Congress it will rest to take those … measures which may be necessary for the immediate occupation and temporary government of the [Louisiana Purchase territory]; for its incorporation into our union.