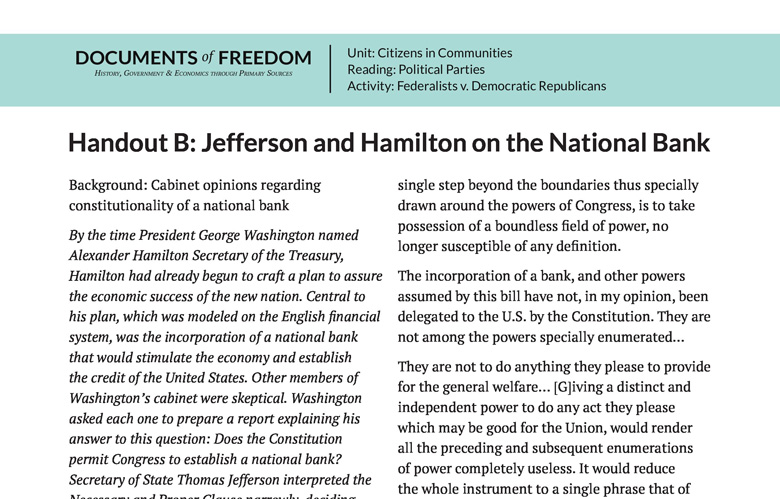 Cabinet opinions regarding constitutionality of a national bank

By the time President George Washington named Alexander Hamilton Secretary of the Treasury, Hamilton had already begun to craft a plan to assure the economic success of the new nation. Central to his plan, which was modeled on the English financial system, was the incorporation of a national bank that would stimulate the economy and establish the credit of the United States. Other members of Washington’s cabinet were skeptical. Washington asked each one to prepare a report explaining his answer to this question: Does the Constitution permit Congress to establish a national bank? Secretary of State Thomas Jefferson interpreted the Necessary and Proper Clause narrowly, deciding that the bank was unconstitutional because it was not specifically included in the enumerated powers of Congress. Hamilton built his defense of the bank on the implied powers of the Necessary and Proper Clause. Hamilton’s argument was more persuasive to Washington and he signed the Bank Bill. These approaches to understanding the powers of the national government set the foundation for analysis of the constitutional limits on national power continuing into the present day. They also marked the beginning of two political parties.

Thomas Jefferson, Opinion on the Constitutionality of the Bill for Establishing a National Bank (1791)

I consider the foundation of the Constitution as laid on this ground that “all powers not delegated to the U.S. by the Constitution, not prohibited by it to the states, are reserved to the states or to the people” [Tenth Amendment]. To take a single step beyond the boundaries thus specially drawn around the powers of Congress, is to take possession of a boundless field of power, no longer susceptible of any definition.

The incorporation of a bank, and other powers assumed by this bill have not, in my opinion, been delegated to the U.S. by the Constitution. They are not among the powers specially enumerated…

They are not to do anything they please to provide for the general welfare… [G]iving a distinct and independent power to do any act they please which may be good for the Union, would render all the preceding and subsequent enumerations of power completely useless. It would reduce the whole instrument to a single phrase that of instituting a Congress with power to do whatever would be for the good of the United States; and, as they would be the sole judges of the good or evil, it would be also a power to do whatever evil they please and this can never be permitted.

It is not denied that there are implied well as express powers, and that the former are as effectually delegated as the latter…

Then it follows, that as a power of erecting a corporation may as well be implied as any other thing, it may as well be employed as an instrument or mean of carrying into execution any of the specified powers, as any other instrument or mean whatever. The only question must be in this, as in every other case, whether the mean to be employed or in this instance, the corporation to be erected, has a natural relation to any of the acknowledged objects or lawful ends of the government. Thus a corporation may not be erected by Congress for superintending the police of the city of Philadelphia, because they are not authorized to regulate the police of that city. But one may be erected in relation to the collection of taxes, or to the trade with foreign countries, or to the trade between the States, or with the Indian tribes; because it is the province of the federal government to regulate those objects, and because it is incident to a general sovereign or legislative power to regulate a thing, to employ all the means which relate to its regulation to the best and greatest advantage…

To establish such a right, it remains to show the relation of such an institution to one or more of the specified powers of the government.

Accordingly it is affirmed, that it has a relation more or less direct to the power of collecting taxes; to that of borrowing money; to that of regulating trade between the states; and to those of raising, supporting & maintaining fleets & armies…

The constitutionality of all this would not admit of a question, and yet it would amount to the institution of a bank, with a view to the more convenient collection of taxes. … To deny the power of the government to add these ingredients to the plan, would be to refine away all government.