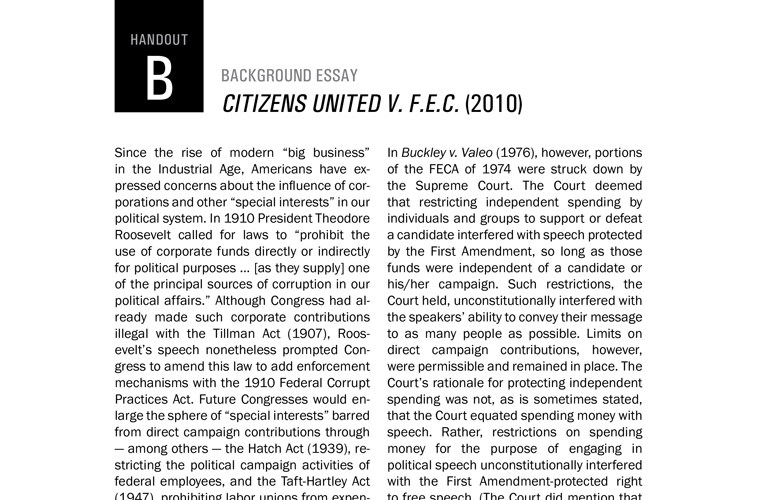 Since the rise of modern “big business” in the Industrial Age, Americans have expressed concerns about the influence of corporations and other “special interests” in our political system. In 1910 President Theodore Roosevelt called for laws to “prohibit the use of corporate funds directly or indirectly for political purposes … [as they supply] one of the principal sources of corruption in our political affairs.” Although Congress had already made such corporate contributions illegal with the Tillman Act (1907), Roosevelt’s speech nonetheless prompted Congress to amend this law to add enforcement mechanisms with the 1910 Federal Corrupt Practices Act. Future Congresses would enlarge the sphere of “special interests” barred from direct campaign contributions through — among others — the Hatch Act (1939), restricting the political campaign activities of federal employees, and the Taft-Hartley Act (1947), prohibiting labor unions from expenditures that supported or opposed particular federal candidates.

Collectively, these laws formed the backbone of America’s campaign finance laws until they were replaced by the Federal Elections Campaign Acts (FECA) of 1971 and 1974. FECA of 1971 strengthened public reporting requirements of campaign financing for candidates, political parties and political committees (PACs). The FECA of 1974 added specific limits to the amount of money that could be donated to candidates by individuals, political parties, and PACs, and also what could be independently spent by people who want to talk about candidates. It provided for the creation of the Federal Election Commission, an independent agency designed to monitor campaigns and enforce the nation’s political finance laws. Significantly, FECA left members of the media, including corporations, free to comment about candidates without limitation, even though such commentary involved spending money and posed the same risk of quid pro quo corruption as other independent spending.

In Buckley v. Valeo (1976), however, portions of the FECA of 1974 were struck down by the Supreme Court. The Court deemed that restricting independent spending by individuals and groups to support or defeat a candidate interfered with speech protected by the First Amendment, so long as those funds were independent of a candidate or his/her campaign. Such restrictions, the Court held, unconstitutionally interfered with the speakers’ ability to convey their message to as many people as possible. Limits on direct campaign contributions, however, were permissible and remained in place. The Court’s rationale for protecting independent spending was not, as is sometimes stated, that the Court equated spending money with speech. Rather, restrictions on spending money for the purpose of engaging in political speech unconstitutionally interfered with the First Amendment-protected right to free speech. (The Court did mention that direct contributions to candidates could be seen as symbolic expression, but concluded that they were generally restrictable despite that.)

The decades following Buckley would see a great proliferation of campaign spending. By 2002, Congress felt pressure to address this spending and passed the Bipartisan Campaign Finance Reform Act (BCRA). A key provision of the BCRA was a ban on speech that was deemed “electioneering communications” — speech that named a federal candidate within 30 days of a primary election or 60 days of a general election that was paid for out of a “special interest’s” general fund (PACs were left untouched by this prohibition). An immediate First Amendment challenge to this provision — in light of the precedent set in Buckley — was mounted in McConnell v. F.E.C. (2003). But the Supreme Court upheld it as a restriction justified by the need to prevent both “actual corruption…and the appearance of corruption.”

Another constitutional challenge to the BCRA would be mounted by the time of the next general election. Citizens United, a nonprofit organization, was primarily funded by individual donations, with relatively small amounts donated by for-profit corporations as well. In the heat of the 2008 primary season, Citizens United released a full-length film critical of then-Senator Hillary Clinton entitled Hillary: the Movie. The film was originally released in a limited number of theaters and on DVD, but Citizens United wanted it broadcast to a wider audience and approached a major cable company to make it available through their “On-Demand” service. The cable company agreed and accepted a $1.2 million payment from Citizens United in addition to purchased advertising time, making it free for cable subscribers to view.

Since the film named candidate Hillary Clinton and its On-Demand showing would fall within the 30-days-before-a-primary window, Citizens United feared it would be deemed an “electioneering communications” under the BCRA. The group mounted a preemptive legal challenge to this aspect of the law in late 2007, arguing that the application of the provision to Hillary was unconstitutional and violated the First Amendment in their circumstance. A lower federal court disagreed, and the case went to the Supreme Court in early 2010.

In a 5-4 decision, the Supreme Court ruled in Citizens United v. F.E.C. that: 1) the BCRA’s “electioneering communication” provision did indeed apply to Hillary and that 2) the law’s ban on corporate and union independent expenditures was unconstitutional under the First Amendment’s speech clause. “Were the Court to uphold these restrictions,” the Court reasoned, “the Government could repress speech by silencing certain voices at any of the various points in the speech process.” Citizens United v. F.E.C. extended the principle, set 34 years earlier in Buckley, that restrictions on spending money for the purpose of engaging in political speech unconstitutionally burdened the right to free speech protected by the First Amendment.