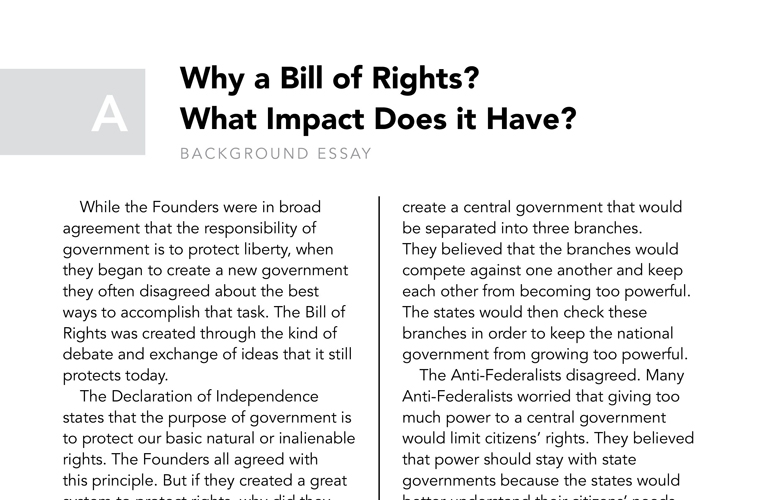 While the Founders were in broad agreement that the responsibility of government is to protect liberty, when they began to create a new government they often disagreed about the best ways to accomplish that task. The Bill of Rights was created through the kind of debate and exchange of ideas that it still protects today.

The Declaration of Independence states that the purpose of government is to protect our basic natural or inalienable rights. The Founders all agreed with this principle. But if they created a great system to protect rights, why did they disagree about a bill of rights?

The Federalists wanted to limit the power of states. The Federalists explained that the Constitution would create a central government that would be separated into three branches.

They believed that the branches would compete against one another and keep each other from becoming too powerful. The states would then check these branches in order to keep the national government from growing too powerful.

Even after the Constitution was written, Federalists and Anti-Federalists disagreed during its ratification.

Federalists supported the Constitution as it was written and did not think a bill of rights was needed. They believed the Constitution limited the government’s powers enough. They also feared that creating a list of rights might lead to other dangers. For example, people might think the government had more power than it had actually been granted. It would be impossible to list every right; Federalists did not want certain rights to be ignored or violated just because they were not listed.

Anti-Federalists believed that a bill of rights was needed to prevent the central government from taking rights from states and citizens. They wanted to protect against a central government that was too powerful and could take away the freedoms they had fought a revolution to preserve. They believed a bill of rights was needed so that citizens would be protected from the government infringing upon [ignoring or taking] their rights.

How Was the Debate Resolved?

The Constitutional Convention ended in late 1787, but the debate went on. Nine states ratified the Constitution by the summer of 1788. However, New York, Virginia, and Massachusetts sent long lists of amendments they wanted in order to make sure peoples’ rights were protected. The people wanted a bill of rights.

James Madison asked other Founders—Thomas Jefferson, John Adams, George Mason, and President George Washington—for advice. They all supported a bill of rights. Mason, who had written the Virginia Declaration of Rights to protect the rights of Virginians, suggested using state bills of rights as a guide. Madison agreed to add a bill of rights and used Mason’s Virginia Declaration of Rights as a model.

Though Madison first suggested additions and changes to the original text of the Constitution, Anti-Federalists objected, saying that Congress did not have the power to change the original form of the Constitution that had been ratified by the states. They decided the Amendments would be added as a separate list. On August 24, 1789, the House of Representatives sent a list of seventeen amendments to the Senate. The Senate approved twelve.

Those twelve amendments were sent to the states for ratification, but only ten were ratified [approved]. On December 15, 1791, Virginia’s state convention became the last state needed to ratify the ten amendments that protected individual rights and states’ powers. These ten amendments, the Bill of Rights, joined the Constitution as the governing document of the United States.

What Is the Impact of the Bill of Rights?

The Bill of Rights only limited actions taken by the federal government against people. The Founders thought citizens would be protected against state governments by their home states’ constitutions. For this reason, the Bill of Rights did not strongly affect Americans’ lives until the Fourteenth Amendment was passed in 1868. The Fourteenth Amendment prohibits the states from violating people’s lives, liberty, or property without due process.

The Bill of Rights, much debated at the time of writing, still brings about questions and debate today.