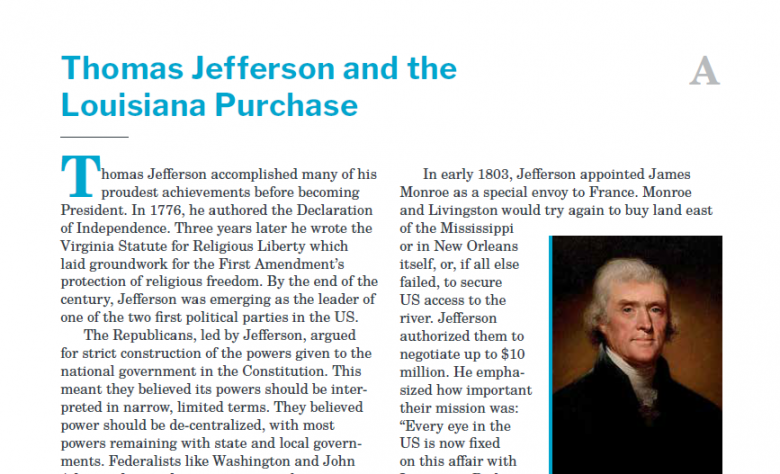 Thomas Jefferson and the Louisiana Purchase

Thomas Jefferson accomplished many of his proudest achievements before becoming President. In 1776, he authored the Declaration of Independence. Three years later he wrote the Virginia Statute for Religious Liberty which laid groundwork for the First Amendment’s protection of religious freedom. By the end of the century, Jefferson was emerging as the leader of one of the two first political parties in the US.

The Republicans, led by Jefferson, argued for strict construction of the powers given to the national government in the Constitution. This meant they believed its powers should be interpreted in narrow, limited terms. They believed power should be de-centralized, with most powers remaining with state and local governments. Federalists like Washington and John Adams advocated a stronger central government. Jefferson was elected President in 1801, in an election where many Federalists were turned out of national offices.

The US and Napoleon

France had given up all of its territory in North America at the end of the French and Indian War (1763). But Napoleon had plans to re-establish the French empire in North America. In 1801, America learned that Spain had agreed to return Louisiana to France. Many in the US were uneasy. President Jefferson shared that unease. He instructed US Minister to France Robert Livingston to try to buy New Orleans, but Napoleon refused.

Jefferson had always looked upon France as a friend in the world, but he knew this was a potential crisis. Almost half the goods exported from the US were shipped through New Orleans. Jefferson wrote in April of 1802, “There is on the globe one single spot, the possessor of which is our natural and habitual enemy. It is New Orleans.” The new nation depended on the port city for its economic survival.

In early 1803, Jefferson appointed James Monroe as a special envoy to France. Monroe and Livingston would try again to buy land east of the Mississippi or in New Orleans itself, or, if all else failed, to secure US access to the river. Jefferson authorized them to negotiate up to $10 million. He emphasized how important their mission was: “Every eye in the US is now fixed on this affair with Louisiana. Perhaps nothing since the Revolutionary War has produced more uneasy sensations through the body of the nation.”

Monroe arrived in France in April of 1803 and quickly learned that France had shifted its priorities. Napoleon had given up his desire to recreate an empire in North America. France offered the US the entire Louisiana territory—more than 800,000 acres from Louisiana to the Rockies and beyond—for $15 million. The two American ministers seized the opportunity, going beyond their mandate. They negotiated a purchase treaty and returned to the US in time for an announcement to be made on July 4, 1803.

Jefferson and the Constitution

The Louisiana Purchase Treaty would not be final until it was ratified by the Senate, funded by the House of Representatives, and signed by the President. While the incorporation of these new lands into the United States was a momentous opportunity, Jefferson had reservations about its constitutionality.

Jefferson had always stated his strong belief that the federal government’s powers should be interpreted strictly. In 1791, nearly a decade earlier, he had argued, “To take a single step beyond the boundaries thus specifically drawn around the powers of Congress is to take possession of a boundless field of power, no longer susceptible of any definition.” In 1798, Jefferson had argued that, “Whensoever the General Government assumes undelegated powers, its acts are unauthoritative, void, and of no force.”

The Constitution was at the center of Jefferson’s analysis of the Louisiana Purchase. Jefferson knew that Articles I and II gave the Executive and Legislative Branches roles in treaty-making. Since the states were forbidden by the Constitution from entering into treaties, and the people had no way of doing so, Jefferson reasoned that only the federal government could make treaties to acquire new land.

A special session of Congress disregarded his draft, however, and the Senate ratified the treaty in October of 1803.

Jefferson may have had to compromise his most sacredly-held principles for the Louisiana Purchase to go forward. But he later described the Purchase as a “great achievement.” He wrote in 1810, “It is incumbent on those who accept great charges to risk themselves on great occasions.” President Thomas Jefferson doubled the size of the United States and set a precedent for the acquisition of new lands through means other than war and conquest.